The tennis news (but not only) of the week: Wawrinka and typos

We Are Tennis by BNP Paribas brings you the best of the past week, on and off the courts, day after day. A week marked by Stan Wawrinka’s rebirth, typos on banknotes and a GPS device.

Roland-Garros, day 2. If Americans love to visit Paris as tourist, they enjoy the clay of the Porte d’Auteuil far less: the six American men playing today were knocked out prematurely, including the young hope Frances Tiafoe. Here are the other seeded players who were knocked out today: Medvedev, Basilashvili and Shapovalov in the men’s draw; Georges, Wozniacki, Andreescu, Buzarnescu and Sasnovich in the women’s draw. Marie Bouzkova narrowly avoided a pigeon attack, while a ballgirl was hit in the eye by one of Shapovalov’s serves… but ended up being fine, thankfully. In other news, Europe woke up with a new parliament, and Japan with a great excuse. Having been arrested for driving under the influence, a Japanese lady told the local police that her body naturally produced its own alcohol. 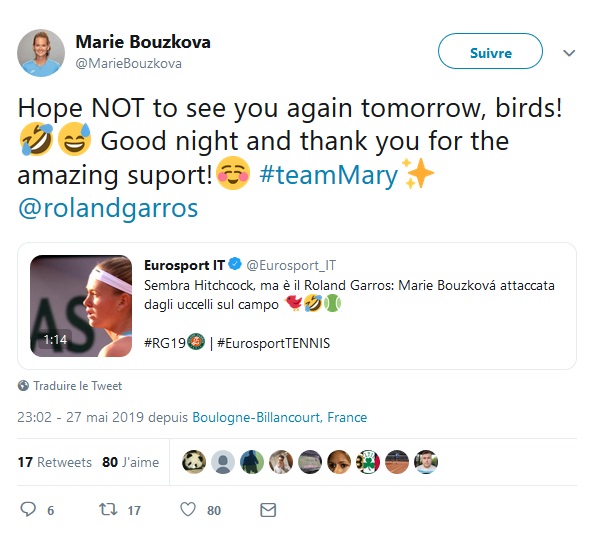 They’re called Benchetrit, Hoang and Barrère: the french crowd is happy to see its sidekicks shine. Gaël Monfils also cruised through his first-round match. Just like Zverev, except the German had to break a racket and battle through five sets to qualify. But unlike Bernard Tomic, who, just like his fellow countryman Nick Kyrgios, thinks that this tournament « sucks ».  While Roger Federer had a good time with Kylian Mbappé, a fortune teller didn’t have such a good time in court: being judged for breaking the speed limit, he explained that he was possessed by the spirit of Michael Schumacher, the ex-Formula 1 champion. Another driver had a bad experience: a British eighty-year old man ended up in the city of Rom, Germany, despite heading for Rome, Italy. A silly typo on his GPS device. 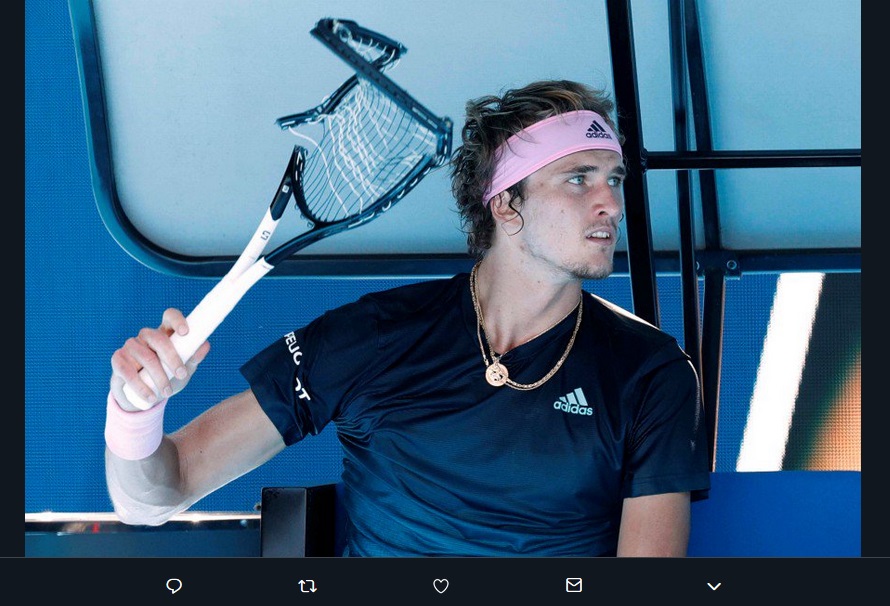 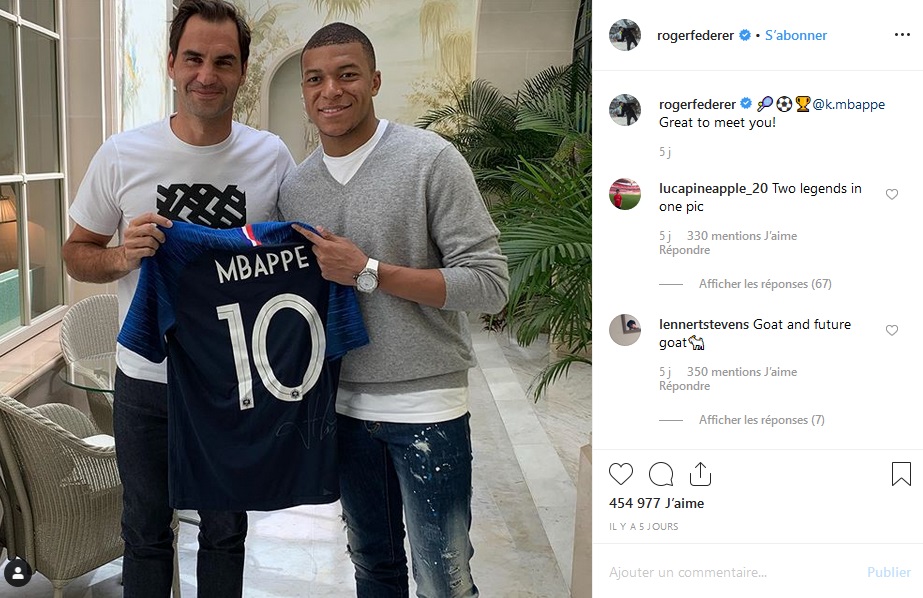 Ivo Karlovic became the first forty-year old to win a match at Roland-Garros since the Dane Torben Ulrich in 1973. Another veteran who keeps on giving is Nicolas Mahut, 37, who is still pleasing the French crowd. The Swiss neighbors were also on fire, with the great performances produced by Roger Federer and Stan Wawrinka. Rafael Nadal is still living the dream, and Benoît Paire won the most beautiful match of the fortnight so far: a 100% French duel against Pierre-Hugues Herbert which he won 11-9 in the fifth set. Outside of tennis, the company Uber launched a new service: you can now hire a submarine to visit the coral reef in Australia. There’s no stopping progress! 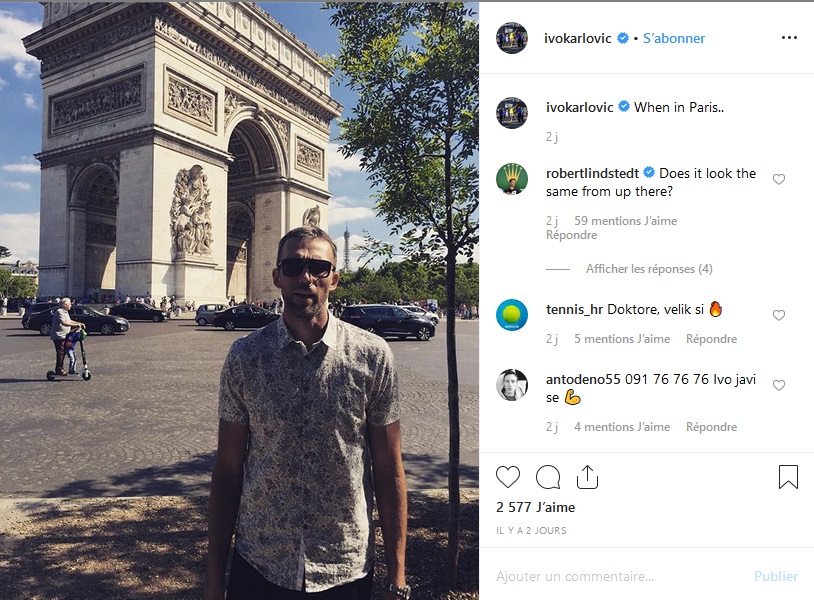 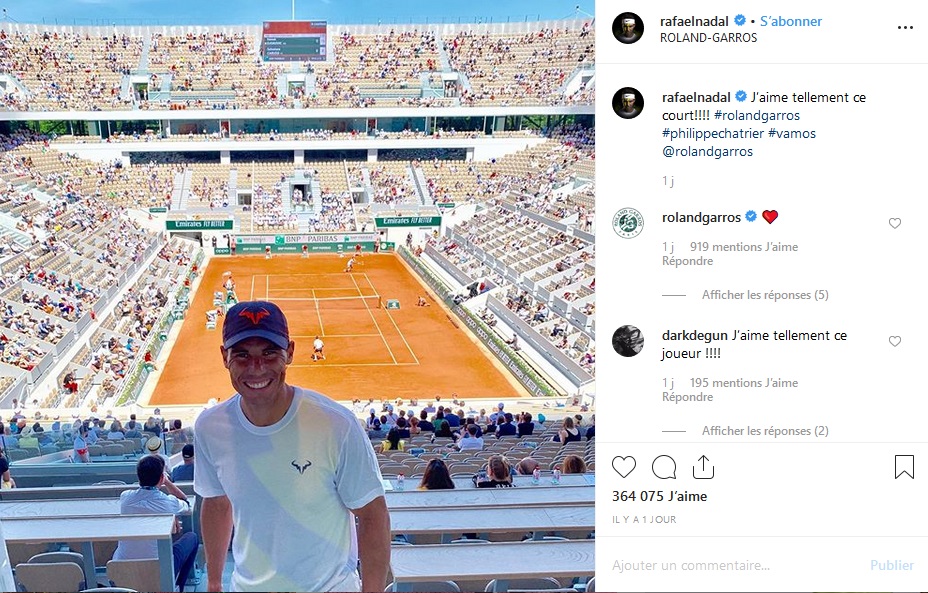 After easily qualifying for the third round, Novak Djokovic announced that he had « great ambitions » for this Parisian fortnight. The other winners of the day were Thiem, Khachanov, Del Potro, Caruso, Zverev, Serena Williams, Halep and Osaka. There are, however, no Frenchwomen left in the women’s draw… Far from Roland-Garros, we wish Nicole Gibbs, who had an operation following the announcement of her salivary gland cancer, a speedy recovery. And we also wish Lucie Safarova, who announced that she was putting away her rackets for good, a happy retirement. In other news, Indian police forces mistakenly arrested two actors dressed up as jihadists, the Australian national bank printed millions of 500$ banknotes with a typo in them, and Tanzania has banned the use of plastic bags to fight against pollution. 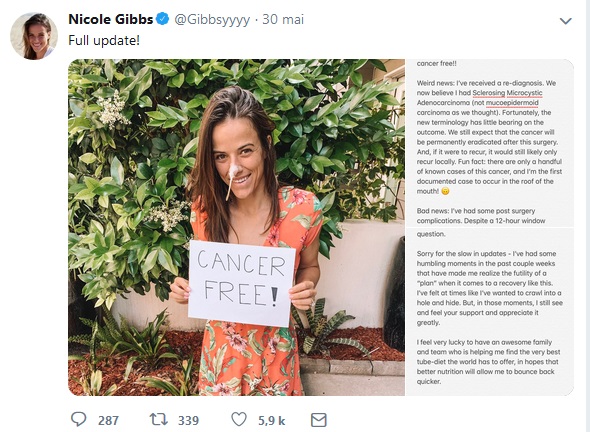 While Gaël Monfils explained in a press conference that he was more afraid of his coach Liam Smith than of his girlfriend Elina Svitolina, the latter decided to set the record straight, - in a funny way - on their joint Instagram account. Cute, much cuter than Lucas Pouille’s reaction after his defeat against Klizan, as the Frenchman was furious that he had to battle in front of many empty seats… Rafael Nadal, on his side, kept going on his road to the final after defeating a brave David Goffin. And if all American men were knocked out early at the Porte d’Auteuil, their female counterparts are doing a great job as Keys, Anisimova, Stephens, Serena Williams and Kenin all qualified. In other news, the Hells Angels were banned in the Netherlands, and Barack Obama, who is currently visiting Brazil, met Pelé. 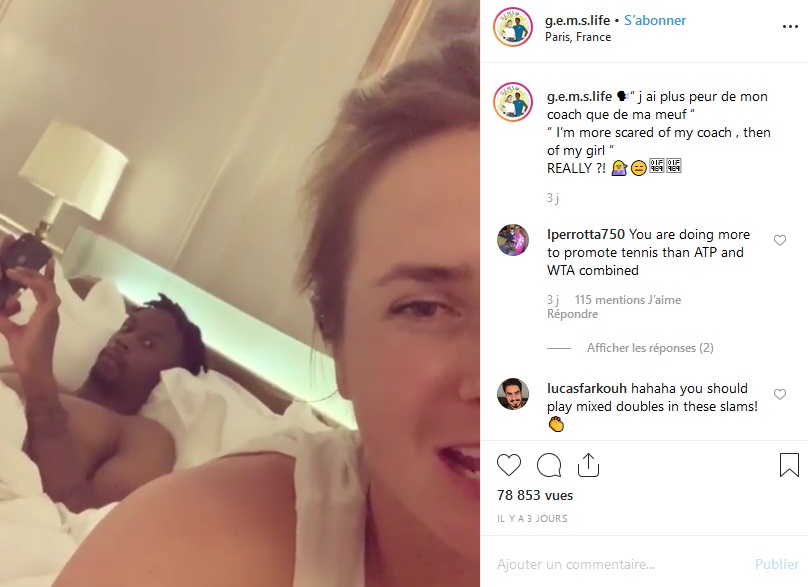 A double surprise in the women’s draw: appearing to be very tense since the start of the tournament, Naomi Osaka ended her tournament with a premature knockout, just like Serena Williams. The ex-world number 1 asked to do her press conference early, which forced Dominic Thiem to shorten his. The Austrian didn’t seem to appreciate her lack of manners… In this very hot day in Paris, Struff took Coric by surprise, Wawrinka won the 500th match of his career and Tsitsipas became the first greek to qualify for the fourth round in Paris since…1936. Another rare event, all the top 10 players are still in the tournament, which is great news for the up-and-coming duels. But the biggest fight of the day was won on the ring of the Madison Square Garden by the Mexican Andy Ruiz, who defeated Anthony Joshua in the heavyweight category, after the referee stopped the match. One of the biggest upsets in the modern history of boxing. 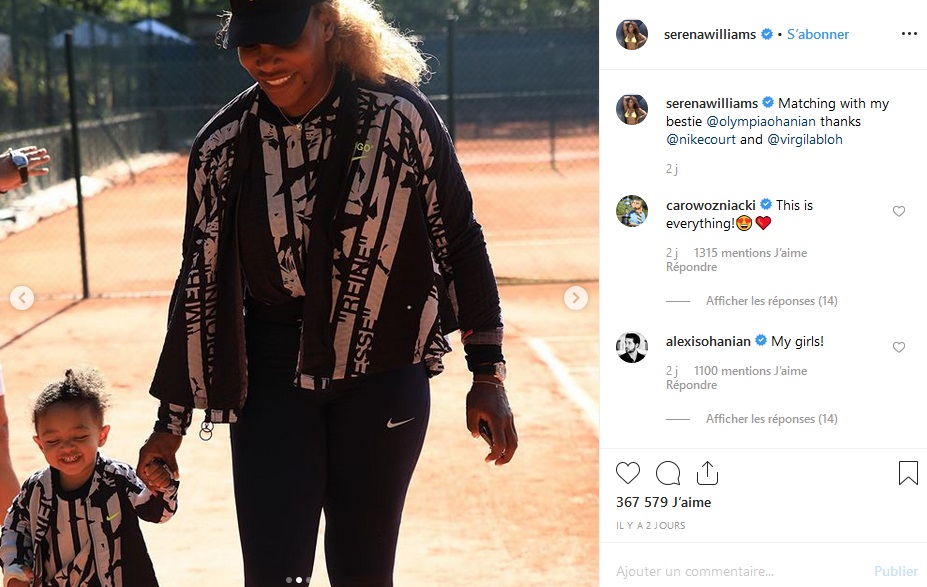 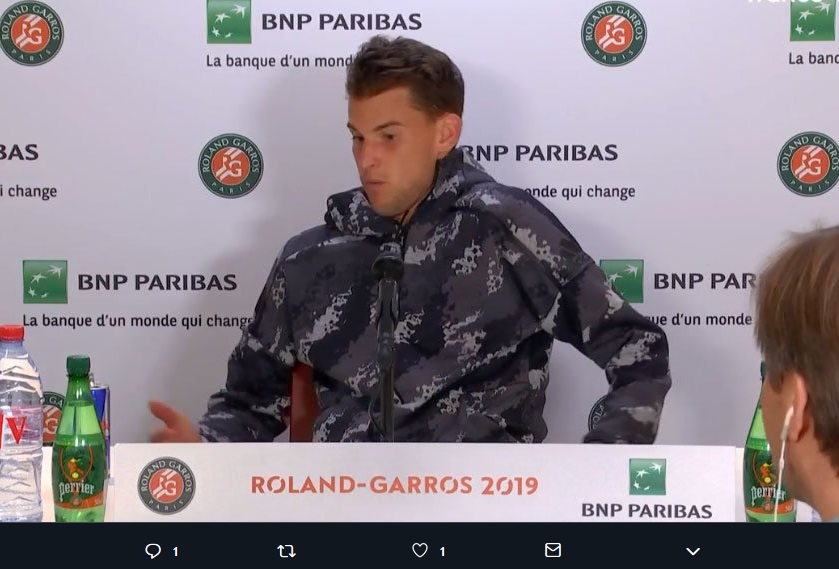 The first week at Roland-Garros ended with the best match so far: the one played by Tsitsipas and Stan « the man » Wawrinka, who ended up winning it in five sets, played at the highest intensity. What a wonderful comeback for the Swiss! Meanwhile, Federer and Nadal both easily won to carry on with their journey in Paris. The big duel of the day in the women’s draw was won by Sloan Stephens against Garbine Muguruza. Overall, the first half of the tournament was truly positive, with a lot of amazing matches, and favorites holding their ranks. In other news, a cruise ship lost control in Venice, and hit the docks, and the coach of the Golden State Warriors sparked a debate in the US after wearing an anti-gun t-shirt after his team’s win against Toronto in the second game of the NBA finals. Hats off. 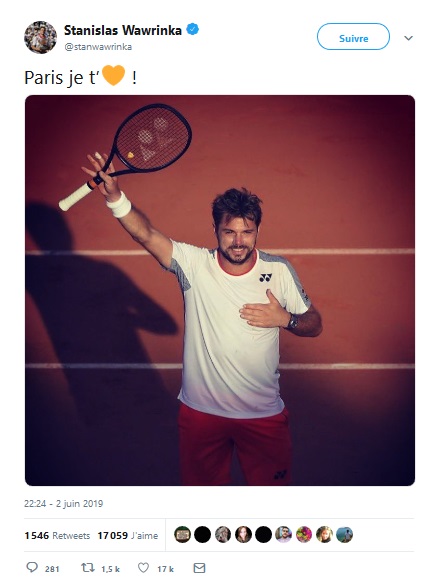 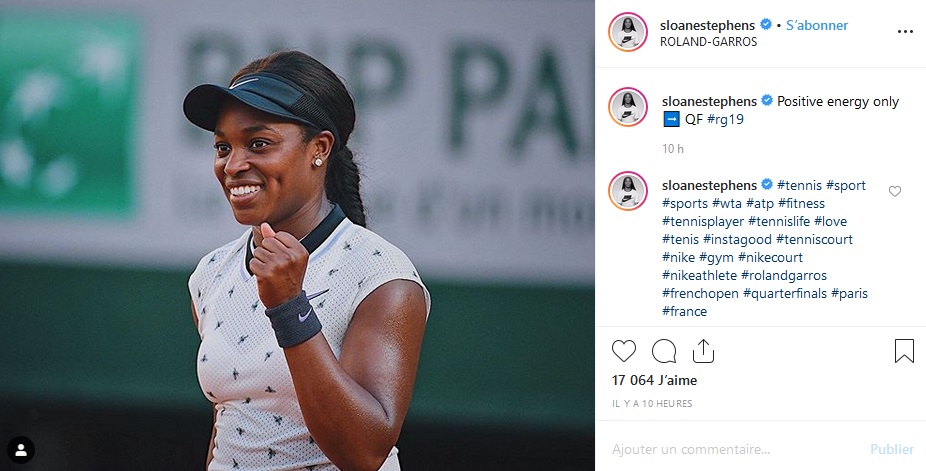 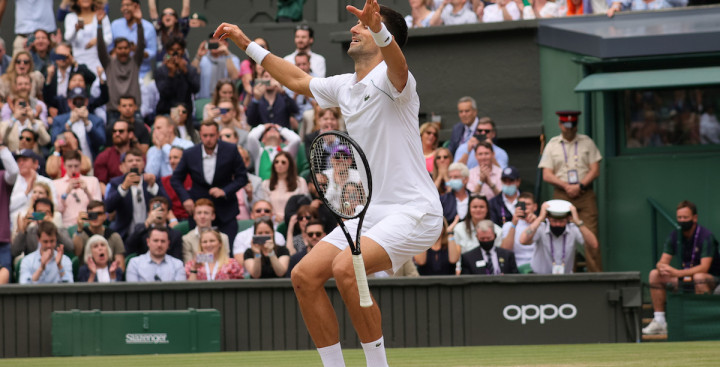