Same old story, same old song. Novak Djokovic begins the year 2016 as he finished 2015, in the first spot of our offbeat ranking. Rafael Nadal will let you know why.

Same old story, same old song. Novak Djokovic begins the year 2016 as he finished 2015, in the first spot of our offbeat ranking. With only a week left until the Australian Open, the Serb hitting his best form. Rafael Nadal can testify. Behind him, Nick Kyrgios put on a show at the Hopman Cup and Victoria Azarenka won her first tournament in two and a half years.

« I don't know anyone playing tennis like this ever. » The words are from Rafael Nadal. Outplayed by Novak Djokovic in the final of the Doha tournament (6-1, 6-2), the Spaniard was impressed by the Serb’s level of play, who won this week’s five games without conceding a single set. It’s Nole’s 60th title on the ATP circuit. Enough to give him confidence, a week from the beginning of the Australian Open.

At the end of the match, Djokovic was congratulated by many Bayern Munich players who were training in the area, of which Arturo Vidal, and the manager, Pep Guardiola. 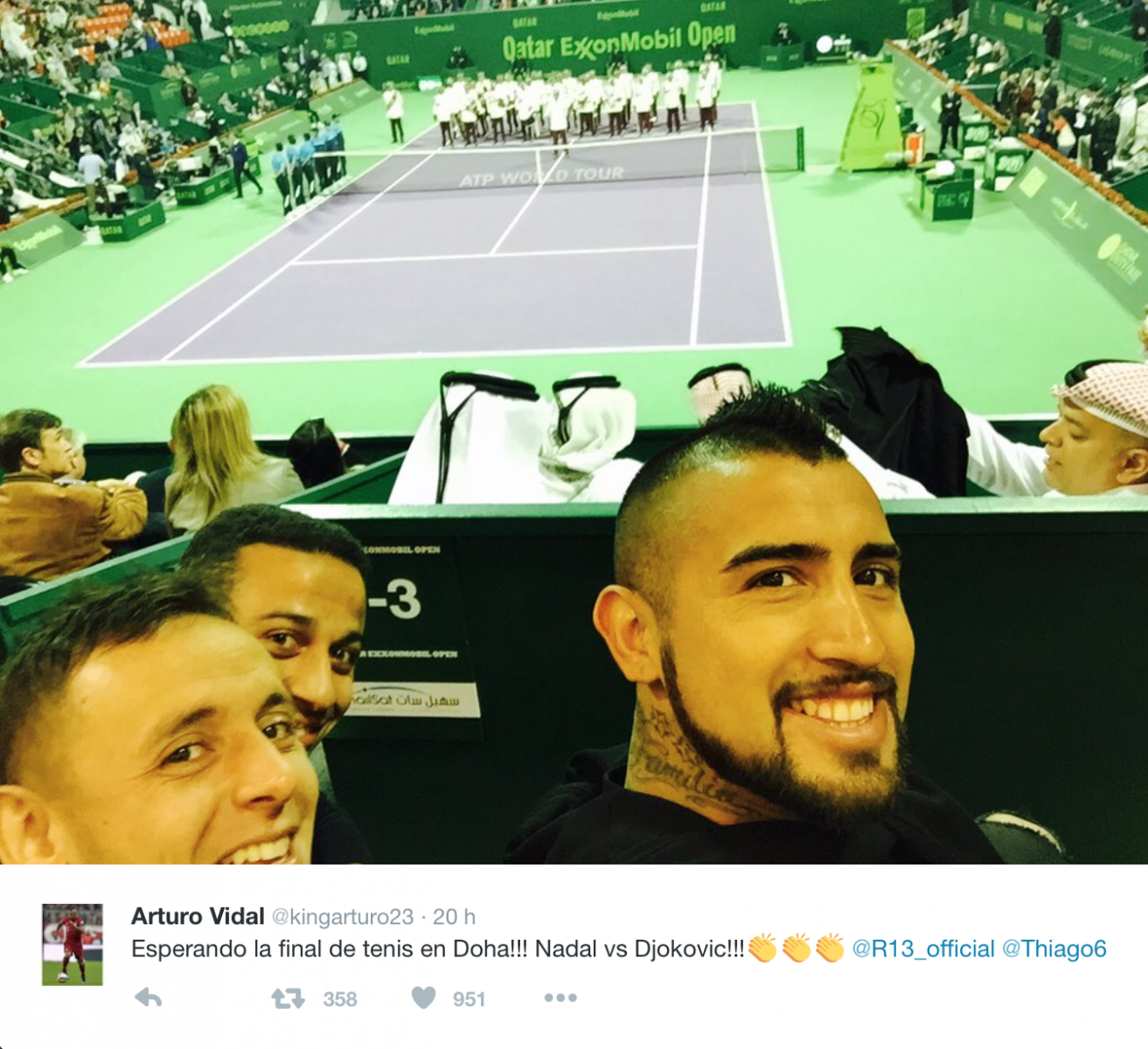 The secret of success ? His gluten free diet. 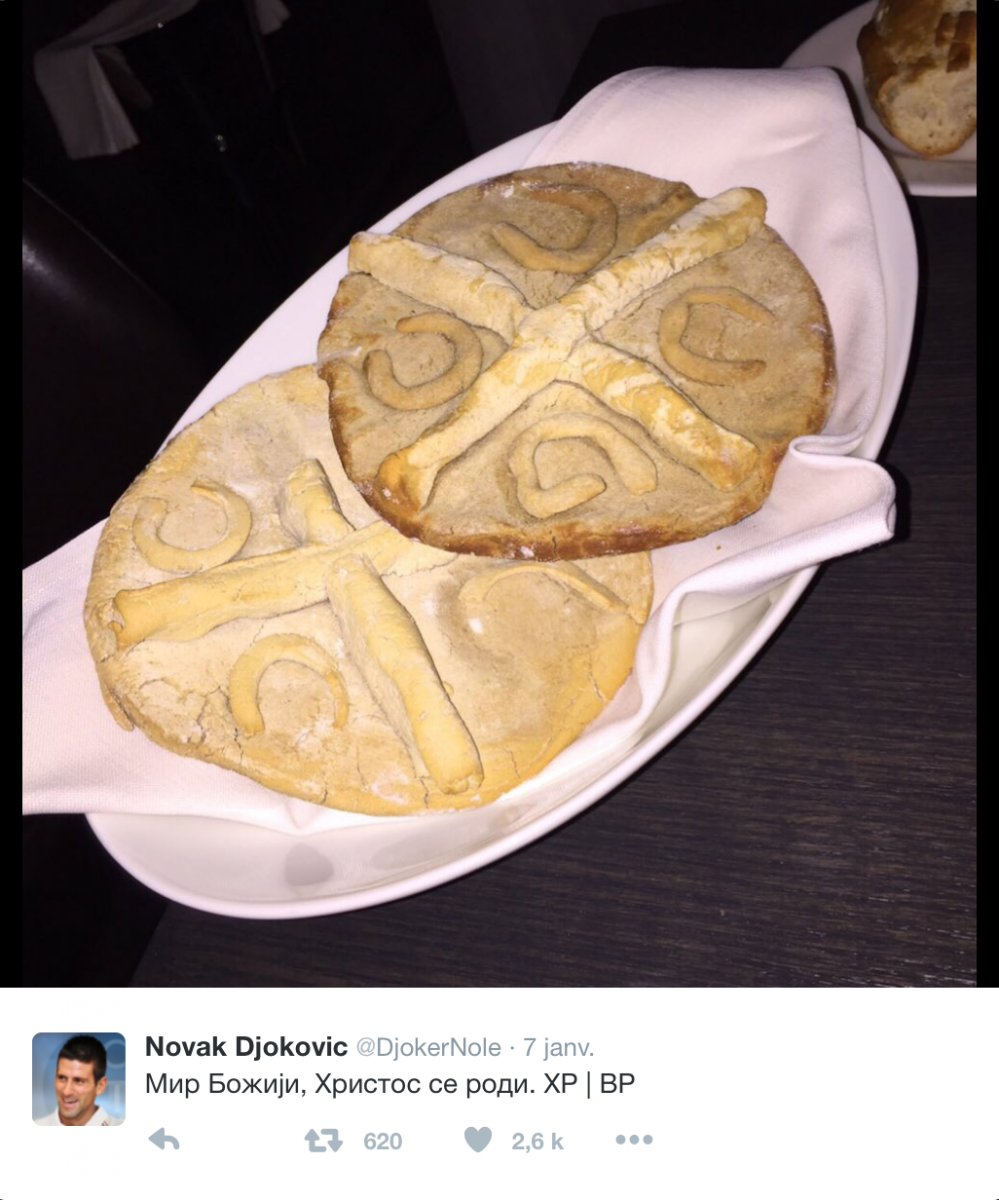 Other than that, Djokovic was seen shooting a commercial. With a very nice McEnroe impression.

The showman is back. Nick Kyrgios kickstarted the year 2016 in the best way by winning the Hopman Cup with Australia. The 20 year-old player won all of his single-matches, notably defeating Andy Murray (6-4, 7-6). He was also decisive in the mixed-doubles against France, with this superb point on match point.

In the final, Kyrgios defeated the Ukrainian Alexander Dolgopolov, securing the title for Australia.

Kyrgios, who seems to be willing to compete with Gaël Monfils 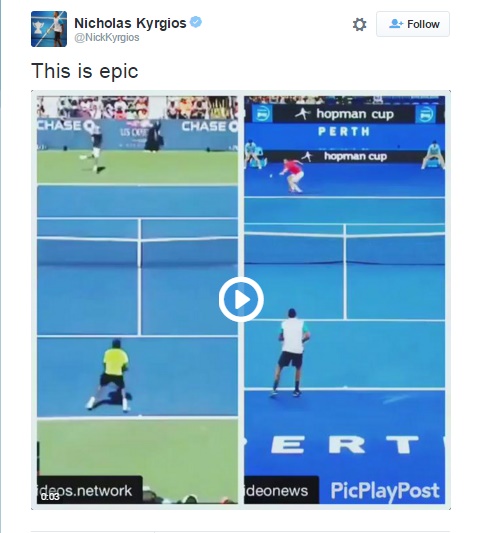 She had been waiting for this moment for 874 days. In Brisbane, Victoria Azarenka has won her first tournament since august 2013, in Cincinnati. In the final, the Belarusian, who hasn’t conceded a single set this week, defeated the German Angelique Kerber (6-3, 6-1). 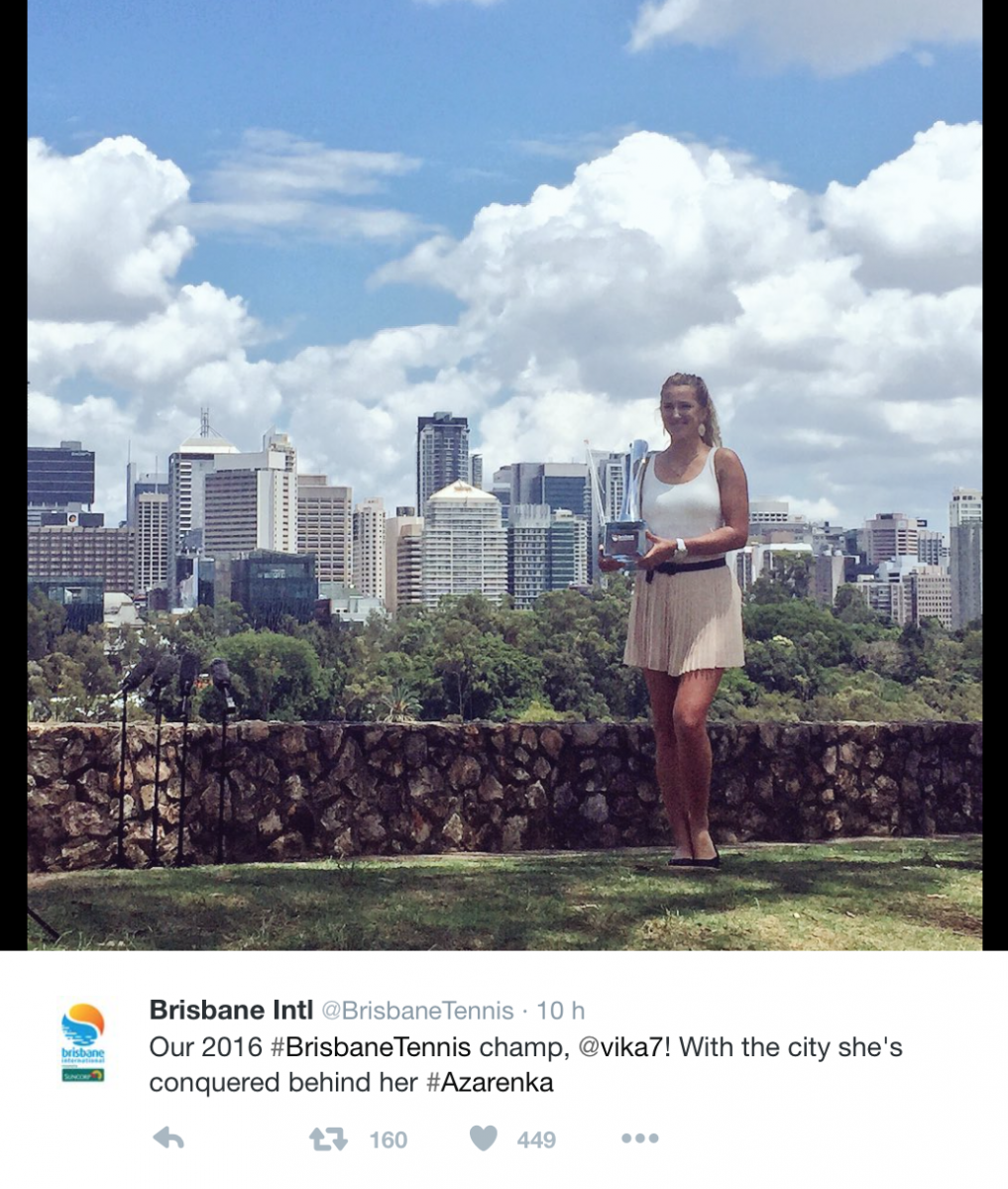 On this occasion, Azarenka even let a young fan live a great moment, by entering the court holding the trophy. 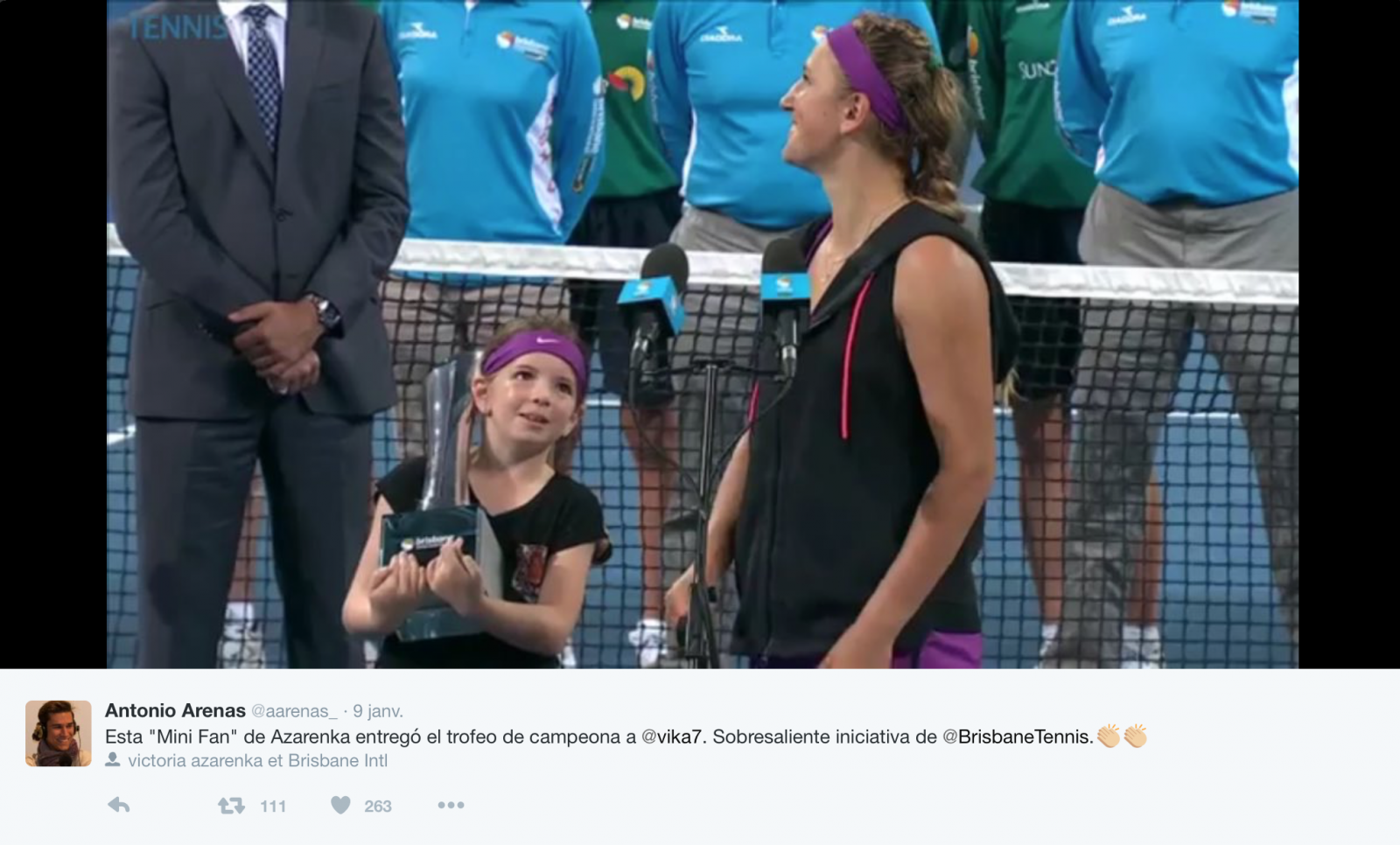 A week which led to a well-deserved rest. 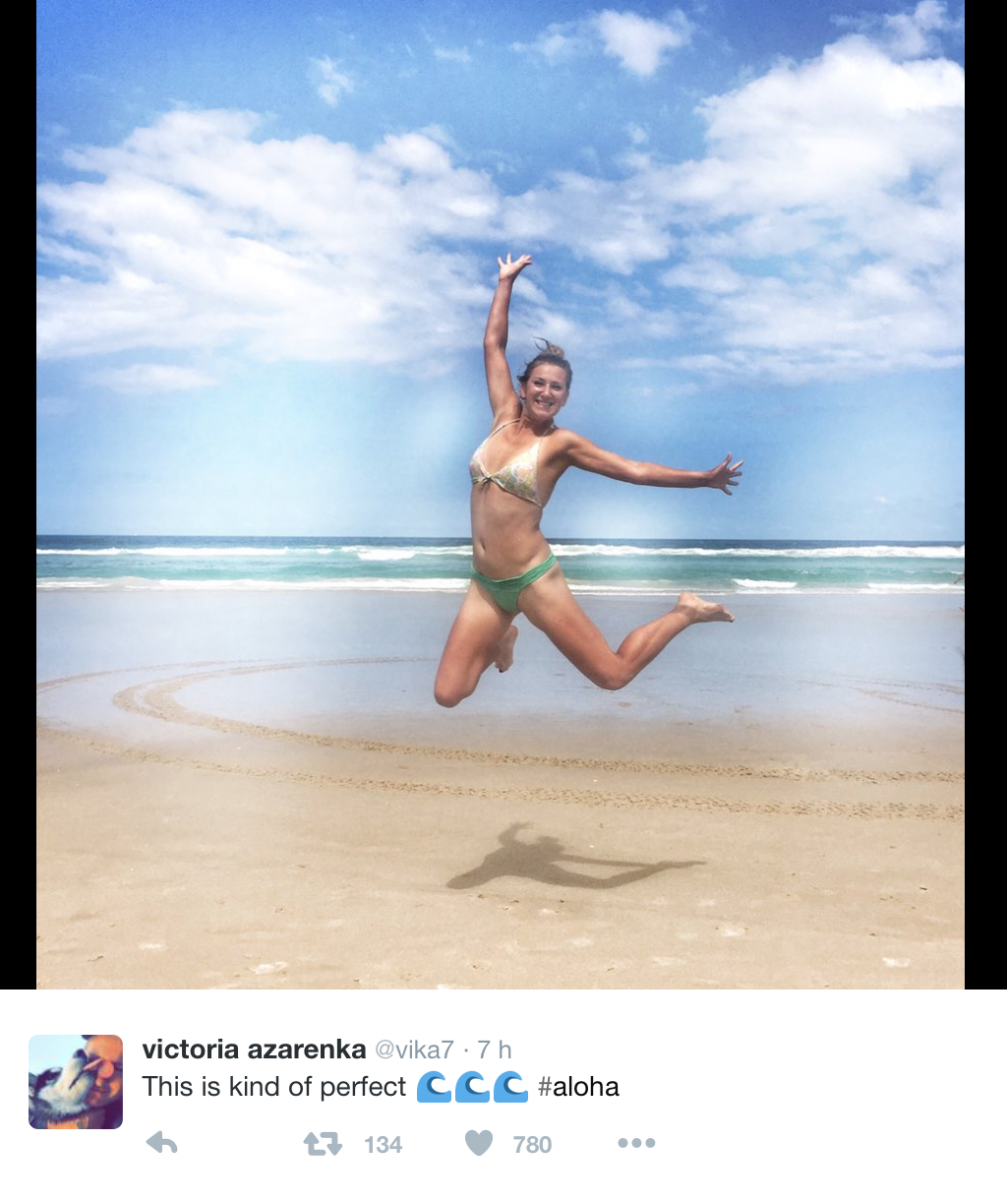 He had only defeated Roger Federer once in his career, in ten confrontations. Milos Raonic has doubled his total against the Swiss on Sunday, in Brisbane (6-4, 6-4), to win the eighth tournament of his career. 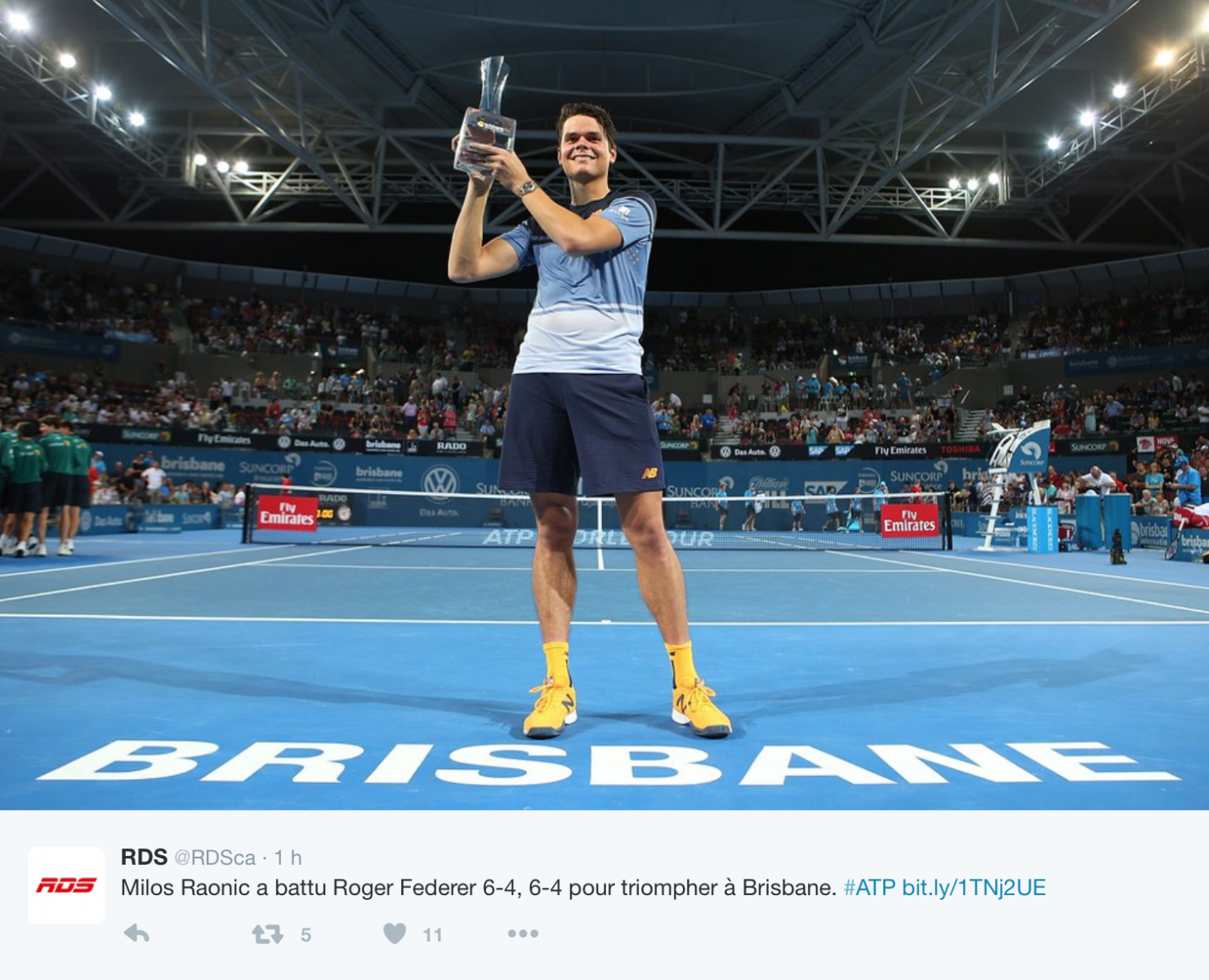 Otherwise, the Canadian has also proved this week that he’s always available for his young fans. 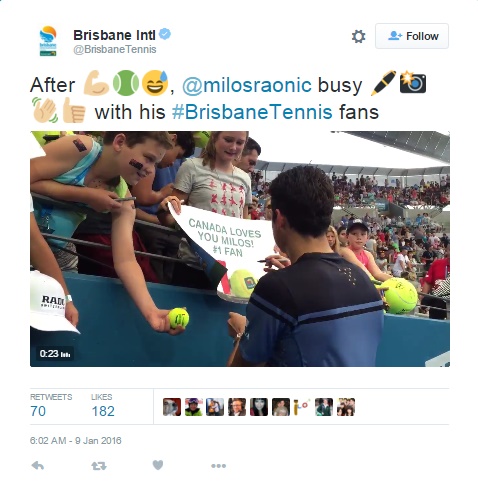 Which could be the reason why he was offered a small head-banging action figure. #jealousy. 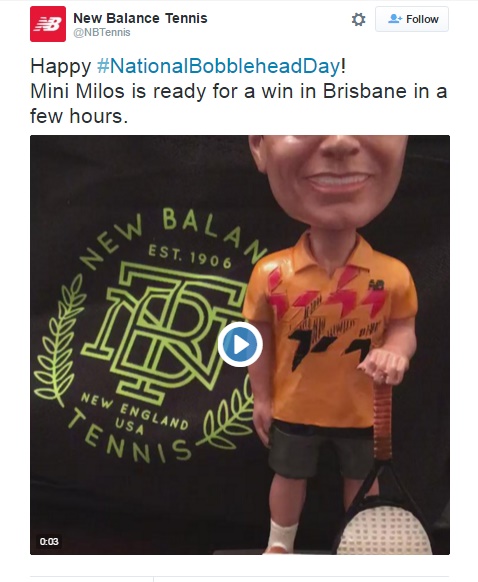 She is the revelation of the week. In Auckland, Naomi Broady achieved a great performance by knocking out the Serb Ana Ivanovic in the fist round (7-5, 6-4). The most beautiful win of he career. Which led to a little emotional breakdown. 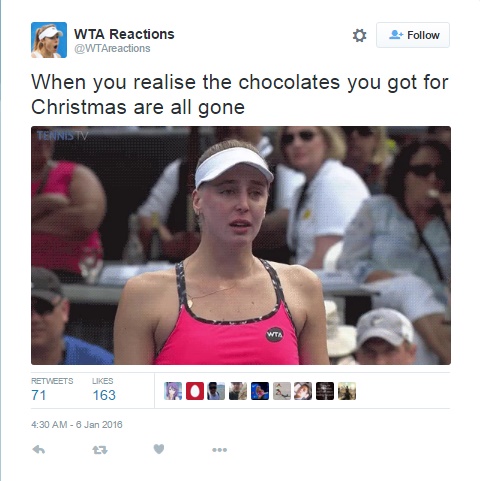 Finally defeated in the quarter-finals by the American Sloane Stephens, who went on to win the tournament a few days later, the 25 year-old Brit received a lot of compliments.

And even of her fellow countryman, Andy Murray.

We’re not quite sure that Jelena Ostapenko agrees with all of this. The Latvian had a big argument with Broady, after throwing her racket, which landed on a balls boy. Which infuriated the Brit, who didn’t keep her tongue in her pocket. 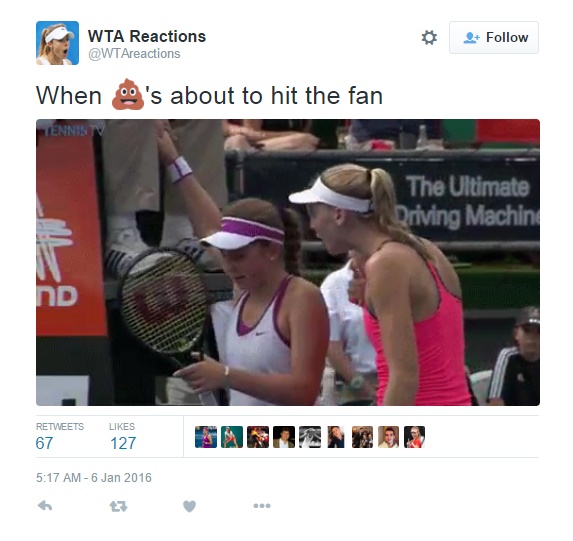 However, it didn’t stop her from celebrating her very pleasant week, by eating a very big dessert. 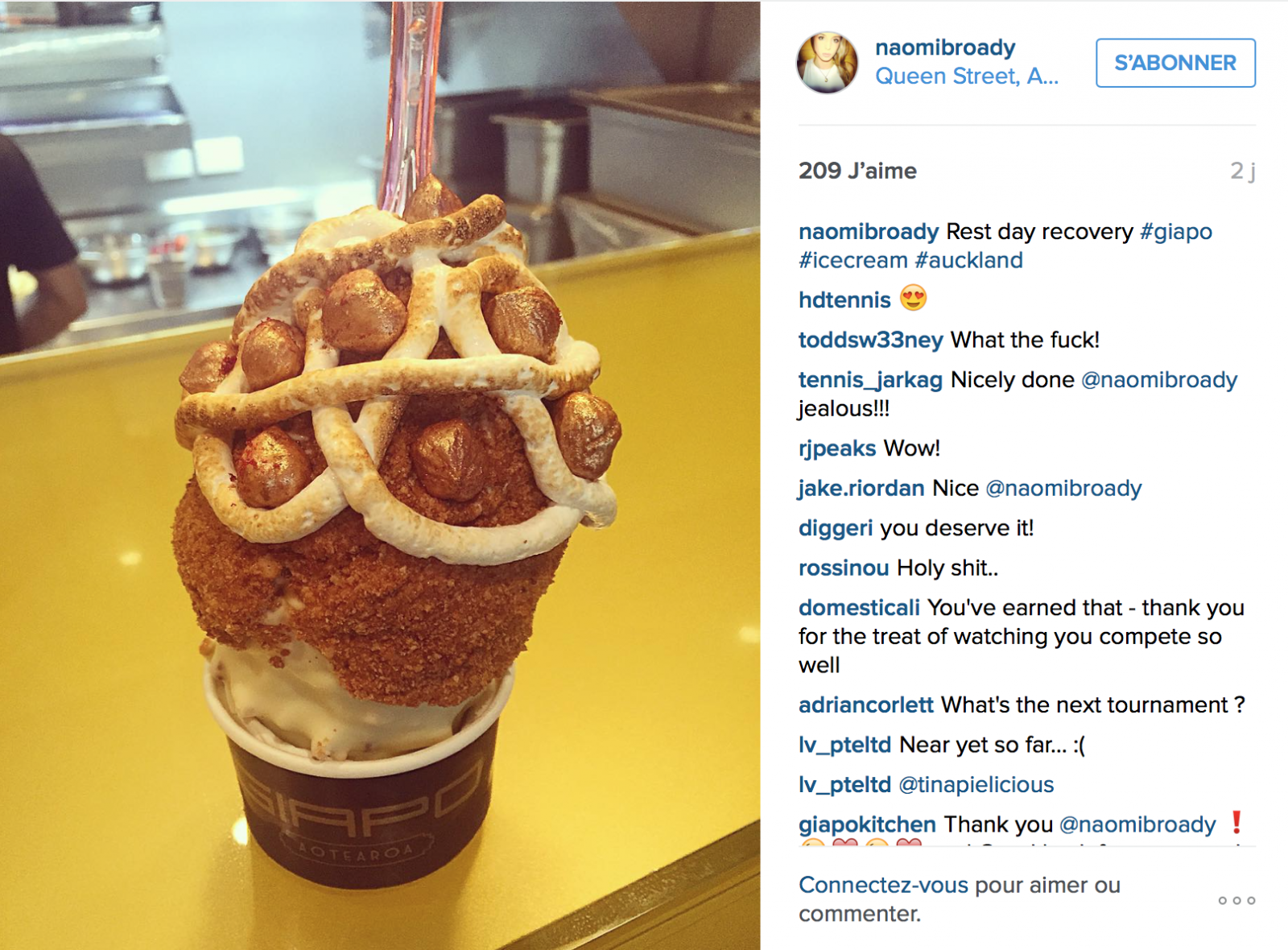 His partner Kim is due to give birth around the second week of February, but the baby could come sooner than expected. The 31st of January for instance, on the day of the final in Melbourne. So what would Andy do in that case ? « It would be disappointing if I was to get to that position, not being able to play the final, but I'd be way more disappointed winning the Australian Open and missing the birth of the child. » explained the Scotsman on Eurosport. « The decision was an easy one. » Classy.

Stan Wawrinka is back on the same rhythm than in 2015, after holding his title in Chennai. The Swiss has been impressive all week, until his win in the final against the Croatian Borna Coric (6-3, 7-5). 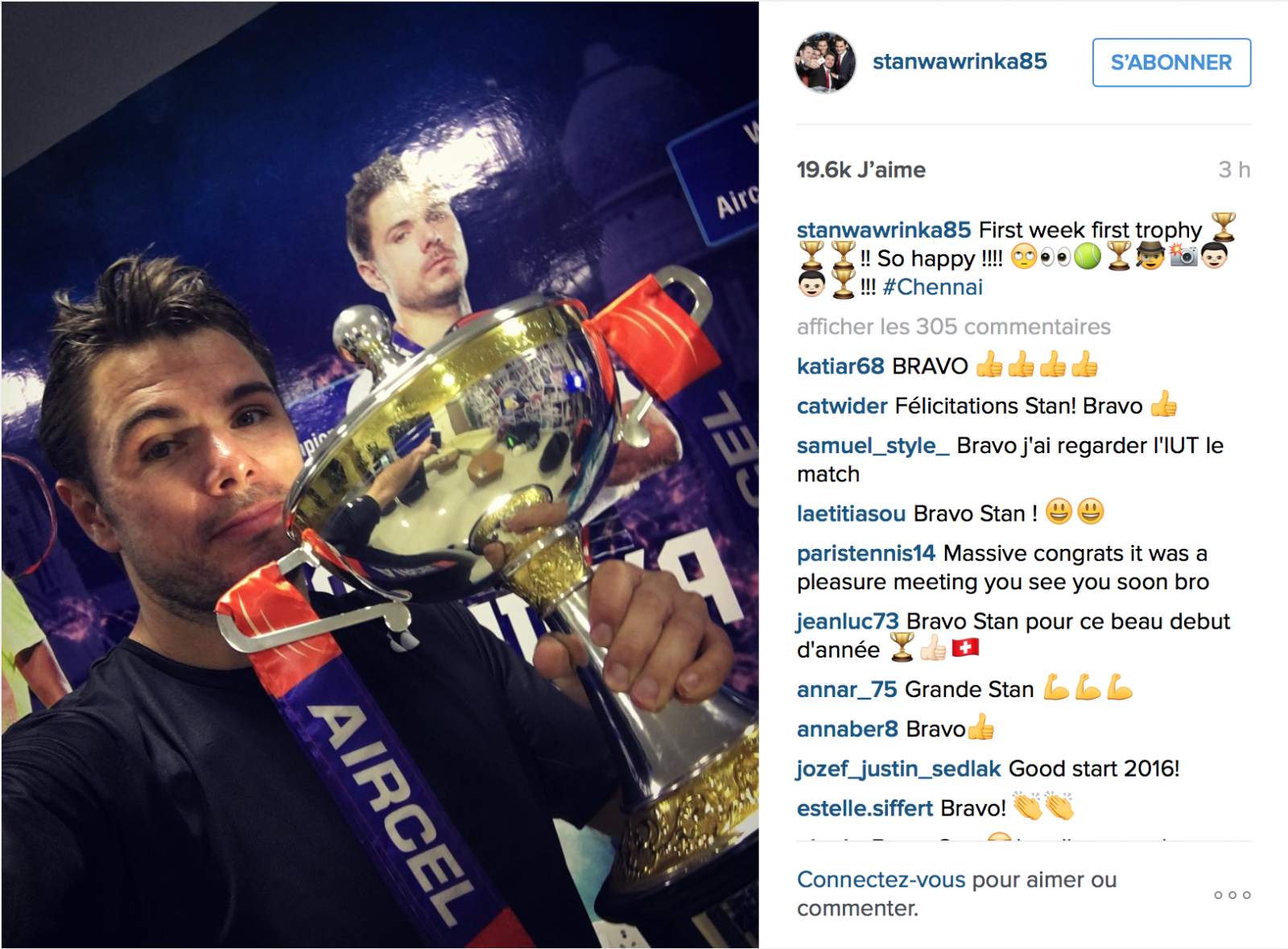 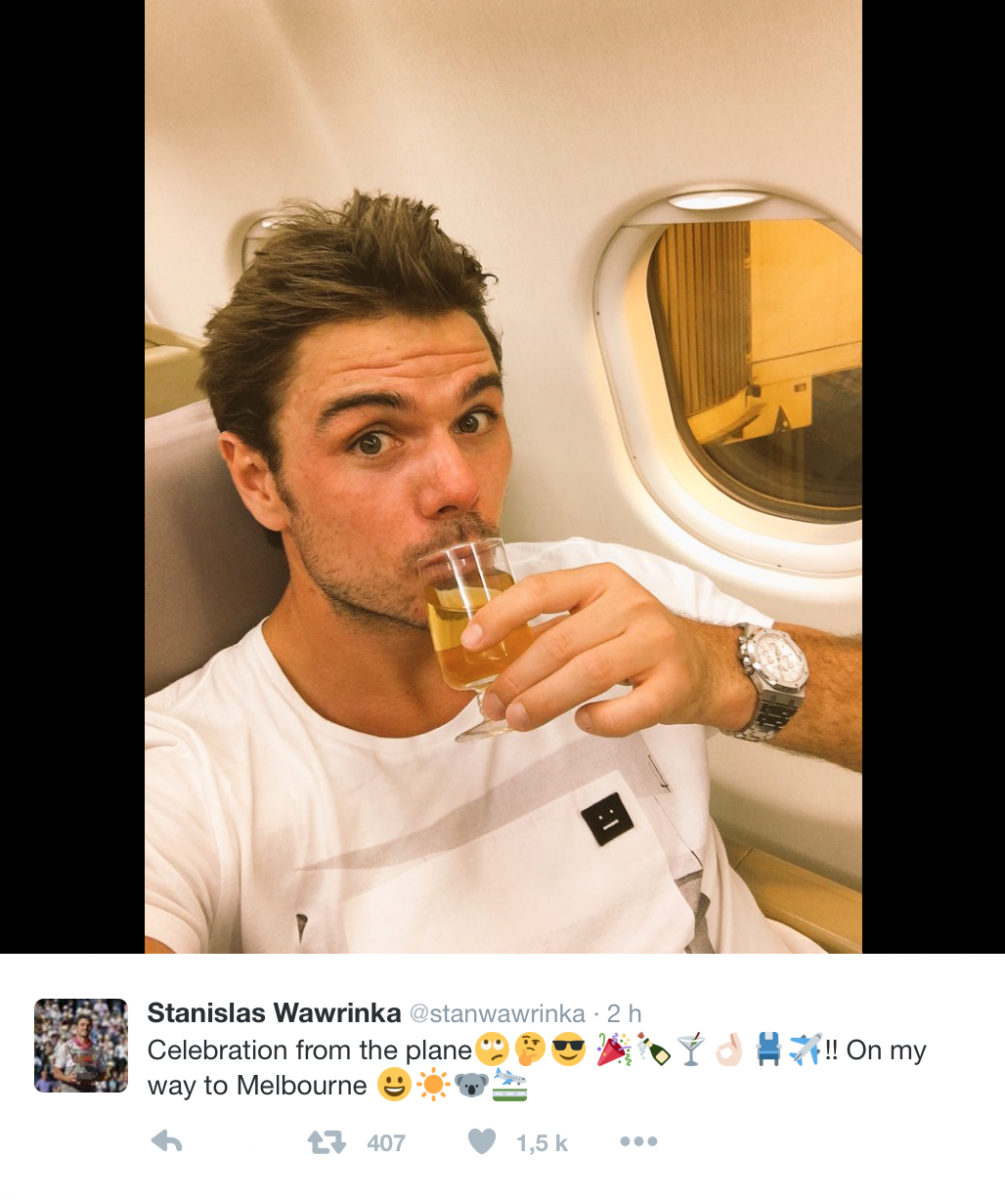 Wawrinka had a good time in India, especially on his tuk-tuk.

Caroline Garcia was engaged in the Hopman Cup this week. Despite her three wins in the singles matches against the German Sabine Lisicki, the Brit Heather Watson and the Australian Daria Gavrilova, Garcia couldn’t manage to lead France out of the group stage.

She’ll comfort herself when she’ll remember that she served an ace against the Australian Nick Kyrgios during the mixed doubles (from 43’ seconds in the video).

The Frenchwoman was even congratulated by Kyrgios.

Rafa carries on his road back to the top level, a switch initiated at the end of 2015. Not quite enough to disturb Novak Djokovic, who destroyed him in the final in Doha, but we’ve seen some progress in the Spaniard’s game. « But the real thing is I had a positive week. I am playing well, and I gonna keep working hard to try to be ready for Australia. And I think I will be. », he explained after his defeat. This week, the Spaniard also appreciated the view from his training center in Doha. 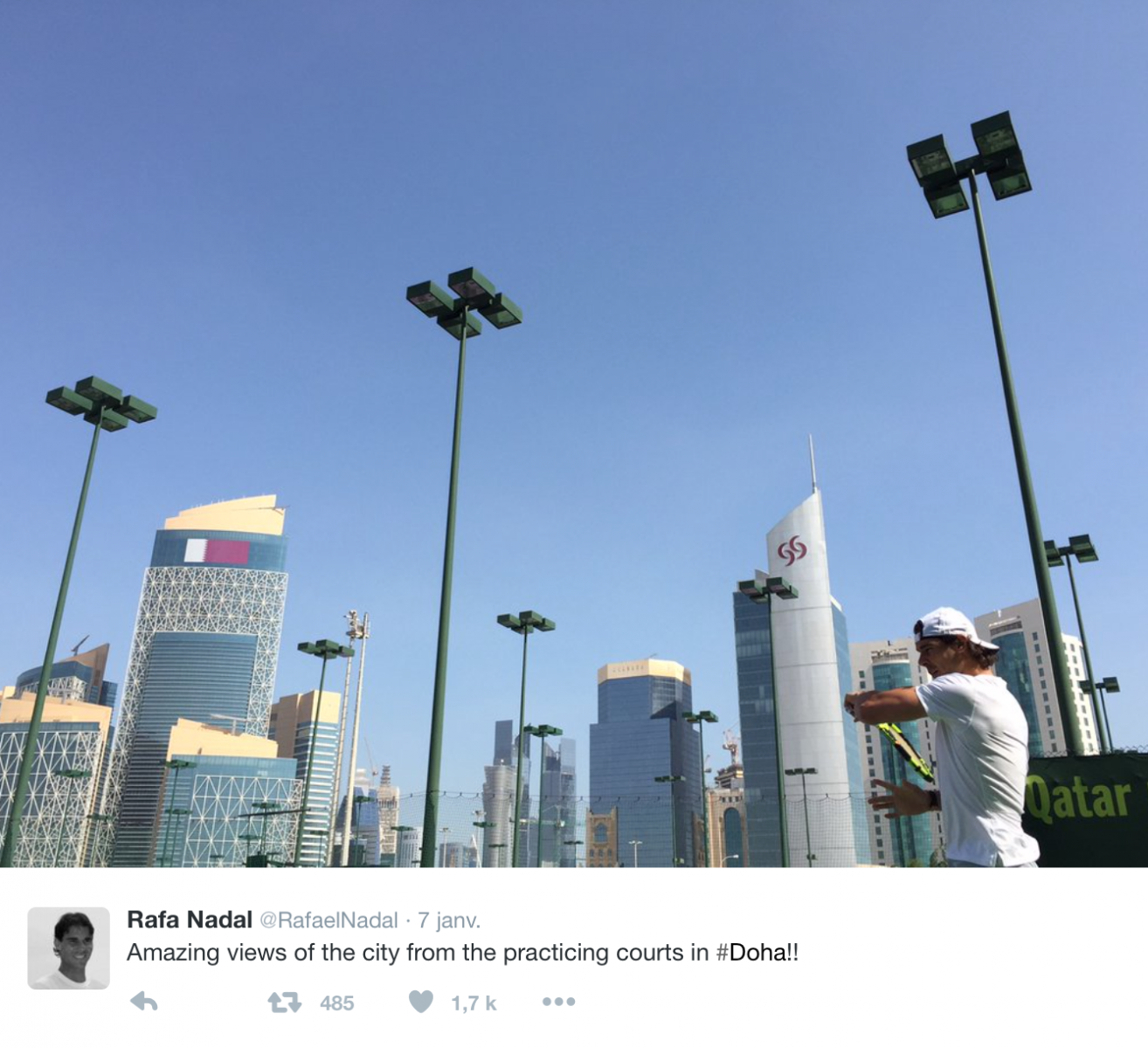 In other news, the ex-world number 1 revealed the reason why he is left-handed at tennis.

Bad news for Toni Nadal, it seems Rafa has found himself a new coach. 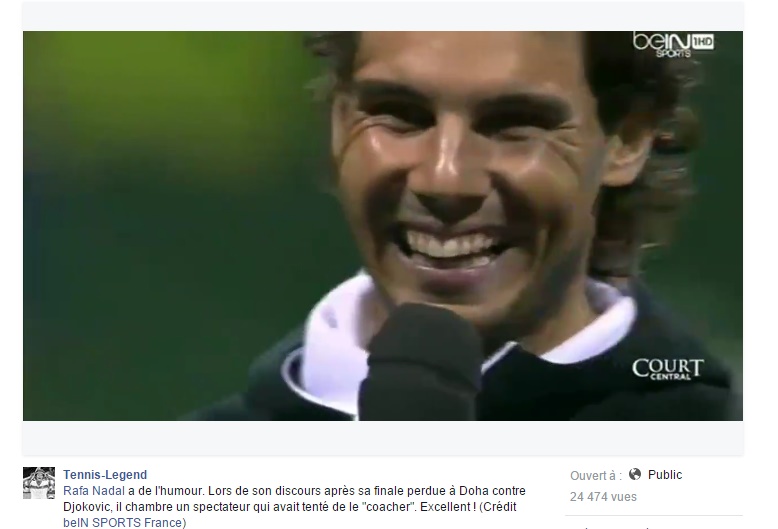 Just for this superb « catch » after Grigor Dimitrov’s missed shot against Gilles Simon in Brisbane.

No 89th title for King Roger, who was defeated by Milos Raonic in the final in Brisbane. The Swiss, who has been ill for most of the week, is still aloof from Jimmy Connors (109 titles), and from Ivan Lendl (94). A good reason to throw his racket in anger. Well, in Swiss anger. 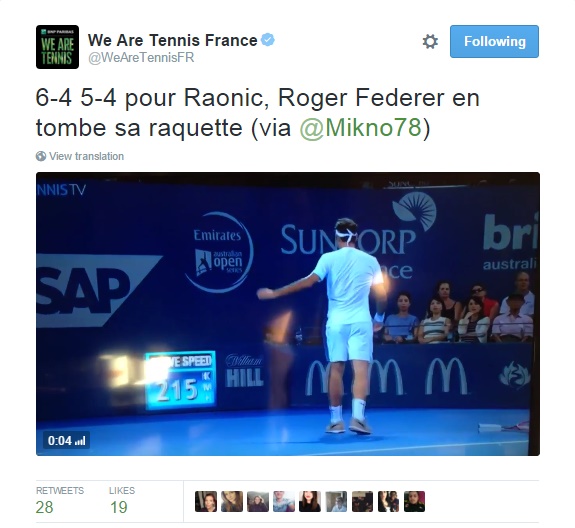 Federer will still keep a few good memories from Brisbane. His meeting with the tournament’s ball boys… 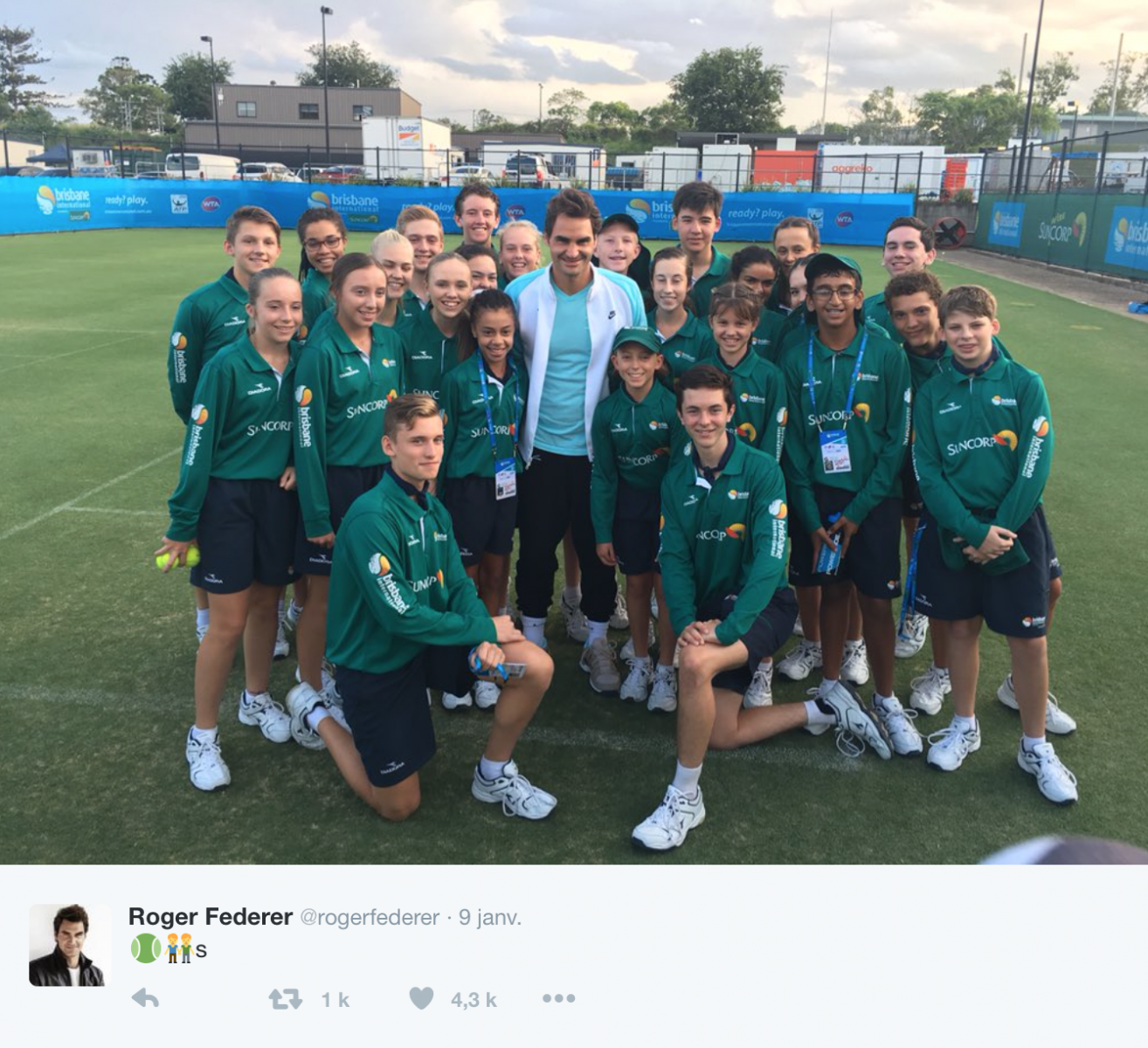 …but mostly his encounter with the Australian tennis legend Rod Laver. The Brit Heather Watson is a very good tennis player. She’s also very good at keepie uppies with a football. 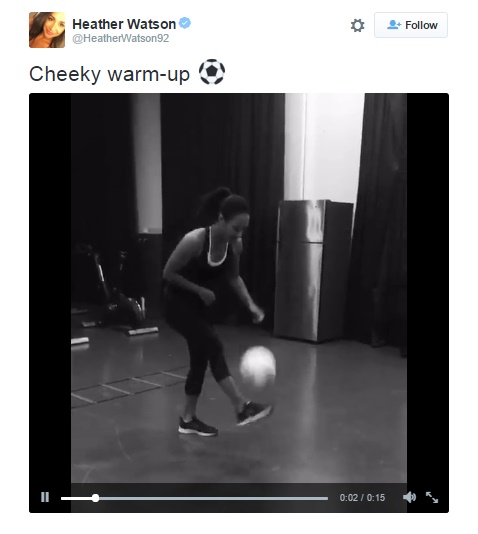 What if she was Real Madrid’s first signing in the Zinedine Zidane era ?

When he’ll retire from tennis, Jérémy Chardy, defeated by the Ukrainian Marchenko in the quarter-finals in Doha (6-3, 7-6), might want to transform himself into a Formula 1 pilot. 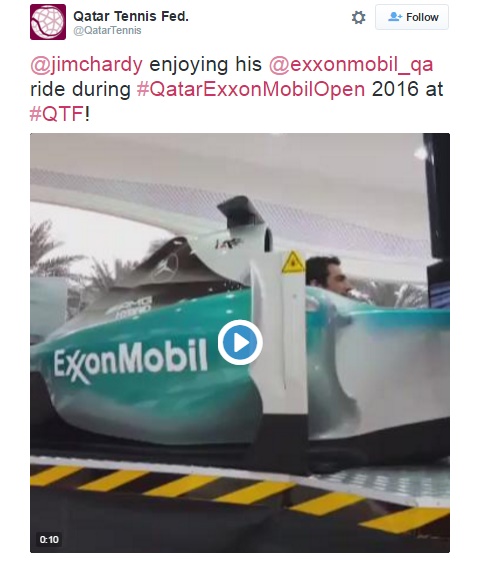 Benoît Paire hasn’t won his first tournament of the season in Chennai, as he was defeated in the semi-finals by his best mate on the circuit, the Swiss Stan Wawrinka (6-3, 6-4). However, by beating the Italian Thomas Fabbiano in the previous round, he’s won his 100th match in his professional career. He is only the 31st frenchman in history to achieve this performance, and the 9th still professionally active. Enough to forgive him for his first argument with a chair umpire, the first in 2016.

Otherwise, Paire enjoyed the beach of the indian coastal resort, before heading back to training. 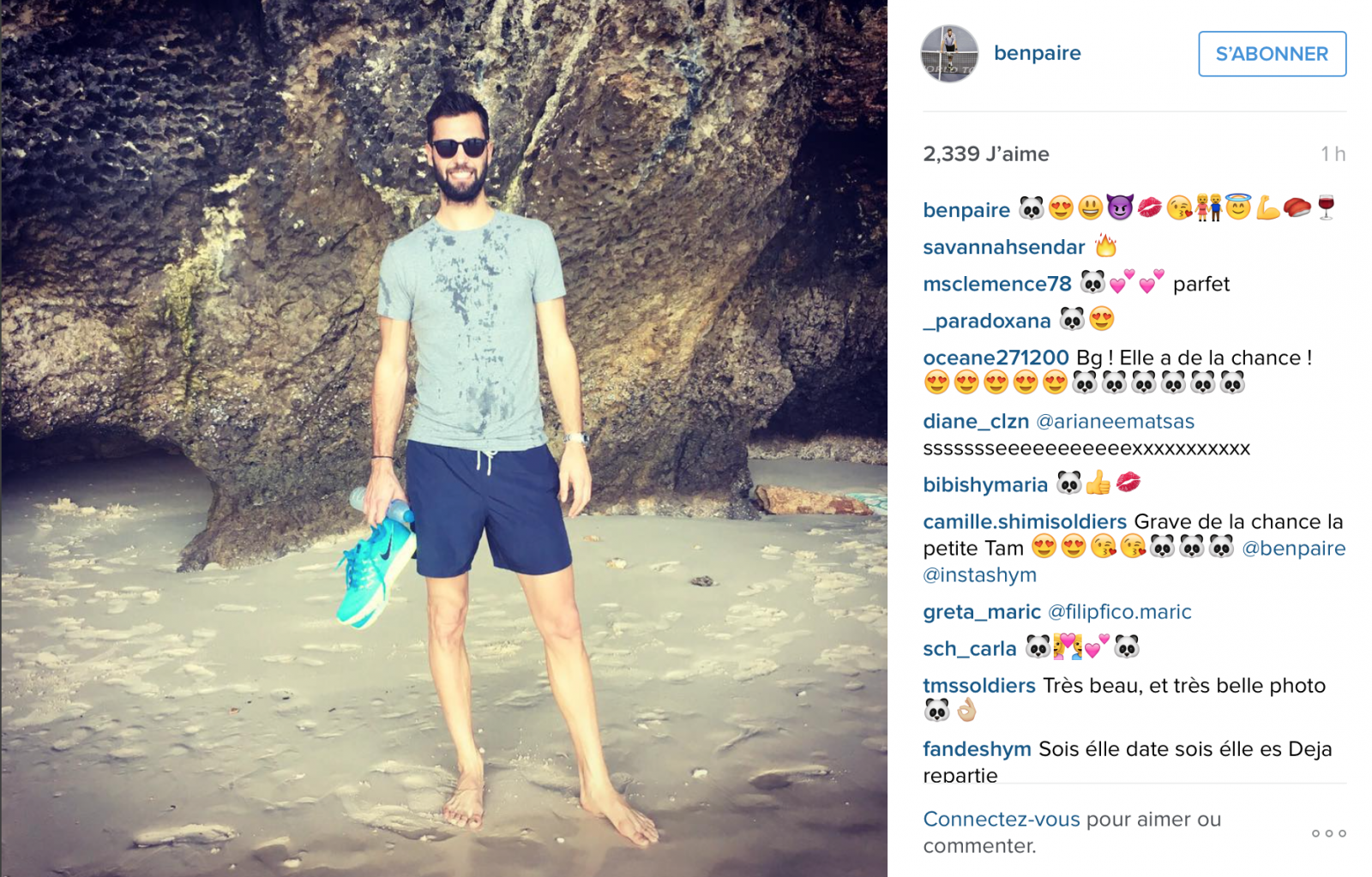 The Zverev brothers challenged the American giant John Isner in a basketball game, in the two versus two format. After having suffered a large defeat in the first leg (11-2), the two Germans rectified their bad start by winning the second leg (12-8).