Federer, the heart of gold

Very little tennis this week, but good deeds off the court. Including Roger Federer who takes the head of the funny WeAreTennis ranking this week.

Idleness isn’t Roger Federer's thing. The Swiss has chosen to take advantage of his few days off in the summer to inaugurate a preschool in Malawi, funded by his foundation. A good deed which allows him to take the first place in our ranking this week, before a glamorous Serena Williams and a Maria Sharapova victim of love.

A very special week for Roger Federer. The Swiss went to Malawi last Monday to inaugurate a help centre for young children funded by his foundation. In this southern African country, more than one million children have no access to day care or preschool. 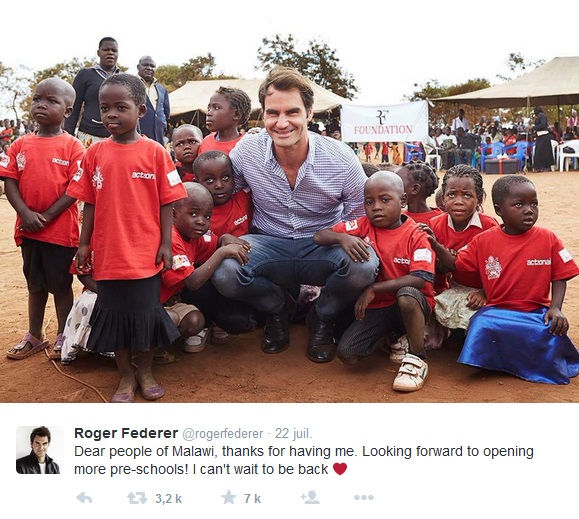 The foundation of the World number 2 has already helped build 80 nursery schools of this kind since 2011, with more than 12 million euros invested, and aims to help 150,000 Malawian children by 2021. A beautiful, very nice gesture that obviously has to be recognised.

Two other information. The first: the Swiss Federation confirmed that Roger Federer as well as Stan Wawrinka will be back in the Davis Cup by BNP Paribas from the 18th to the 20th of September, in play-offs, against the Netherlands. The second: Roger Federer has been named the most "marketable" professional athlete of the planet before the golfers Tiger Woods and Phil Mickelson. Two other tennis players are in the top 10: Djokovic in 7th place and Nadal 8th.

Does Serena have an unsightly body? Critics poured forth lately, but the American isn’t the kind to hide her shapes and took a few days "off" this summer to answer the critics her own way. 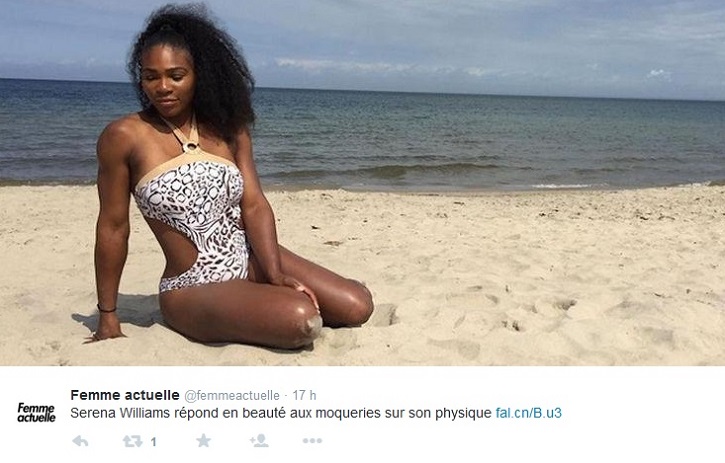 Serena loves photo shoot, especially when she’s on 5 inches heels holding a dog in her arms. 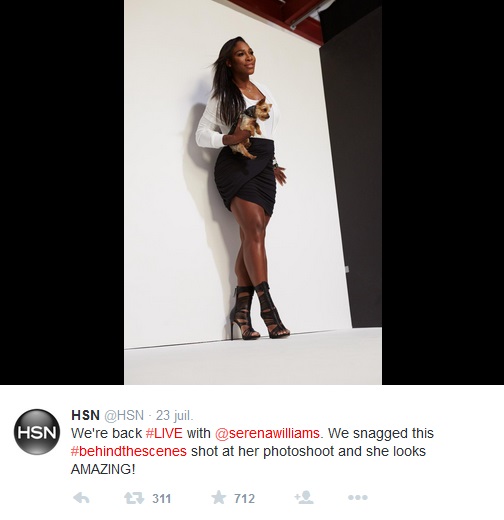 Well, why not. Otherwise, many things are happening outside of tennis this summer to Serena, before focusing on the US Open, she took advantage of her few days off in July to promote the movie Pixels, in which she makes a small appearance. 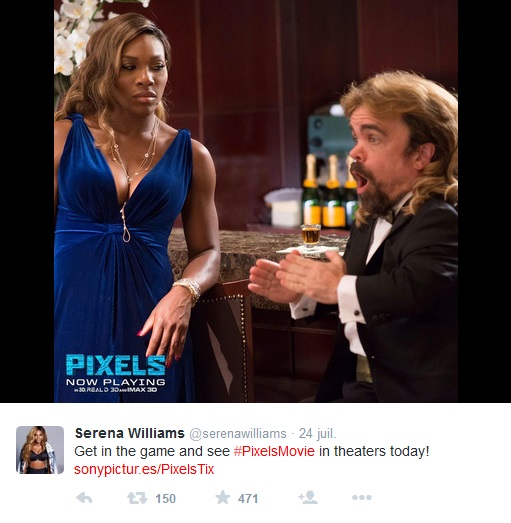 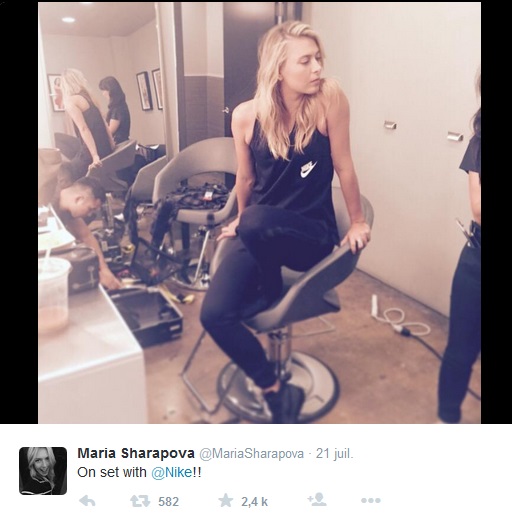 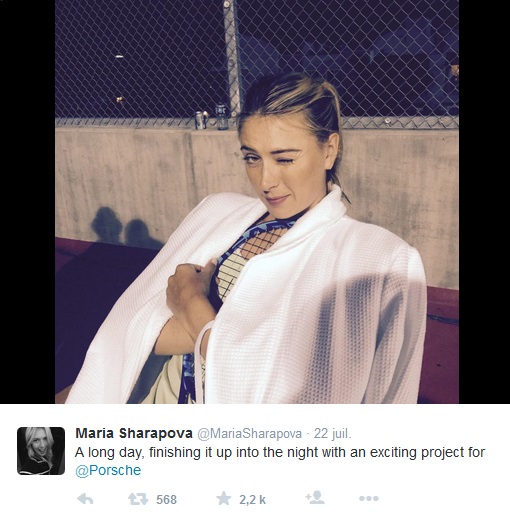 Episode 3: for the cosmetics brand Supergoop! 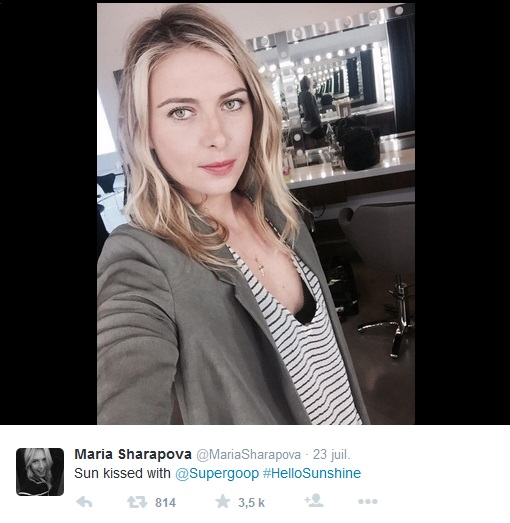 At least with these promotional sessions, the most formidable businesswoman of the tour is taking her mind off things, while the tabloids were all about her breakup with the Bulgarian player Grigor Dimitrov. 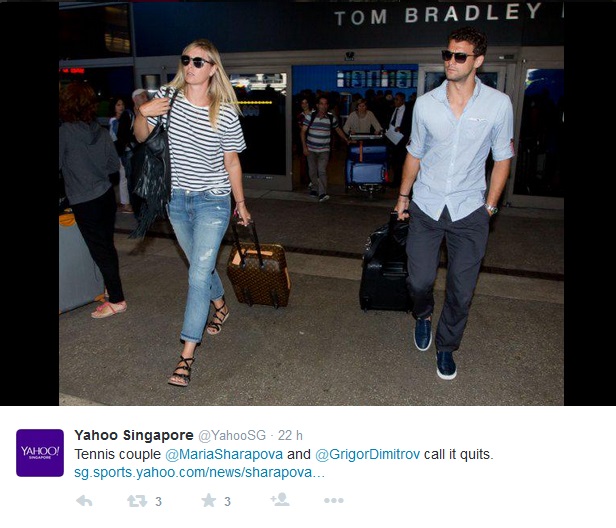 Sharapova is single. In case you haven’t heard, we repeat: SHARAPOVA IS SINGLE.

Priceless Benoît Paire. That's when we expect him the least, one week after causing troubles at the San Benedetto tournament, that the French won his first tournament in Bastad, in Sweden. Yes, you read that right... 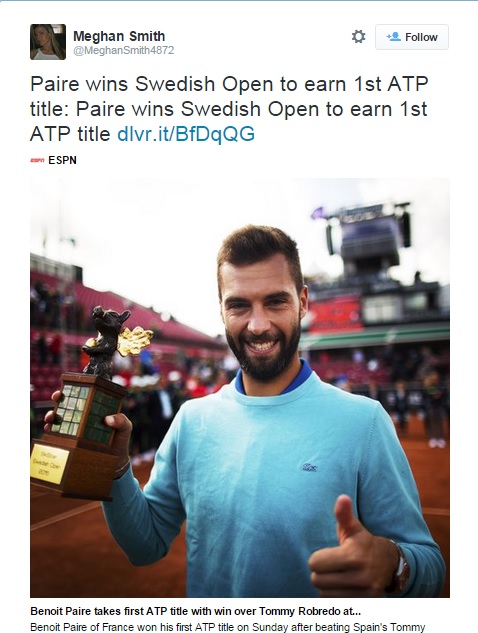 The reaction of his coach Lionel Zimbler after the final sums up the general feeling of surprise, but also the great satisfaction of this talented player racquet in hand yet fragile in his head. 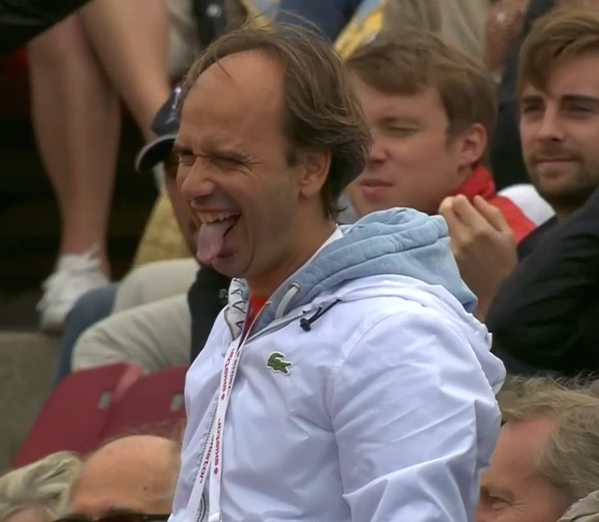 Throughout this beautiful week, the French made no exception to his rule: to post pictures of the sidelines of the tournament. On the menu: picture from under the massage table... 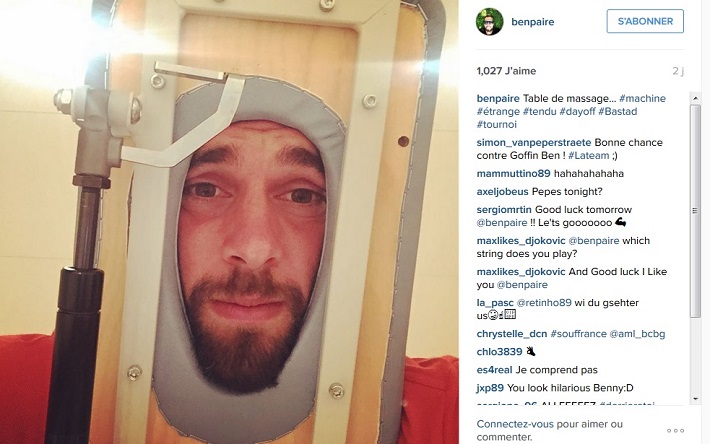 …And picture before the strange masked players party. 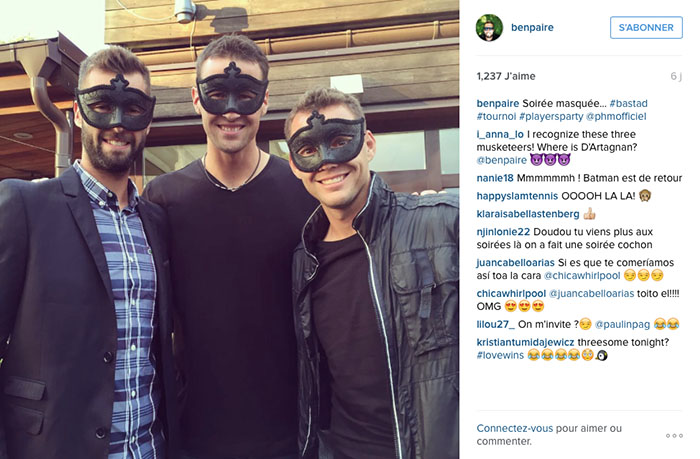 Speaking of men looking for love, Gael Monfils also seems to feel lonely, very lonely. To the point of posting on twitter the lyrics of French rapper Orelsan, full of innuendo.

What a lover… Lover and tease, not hesitating to take up the challenge set a week ago by basketball player Boris Diaw in a TV spot. A dance competition via social networks.

The newcomer of the week is Canadian and has a very long name to say the least: Felix Auger-Aliassime. His performance? To beat the record of the youngest player to win a match on the Challenger tour, at 14 years old. Better, after dominating the world 493th in the first round of the Granby tournament, at home in Canada, he later eliminated the player seeded No. 8, Darian King from Barbados, 205th in the world (7-5, 6- 3).

Enough to get some praise. On his game, but not only. 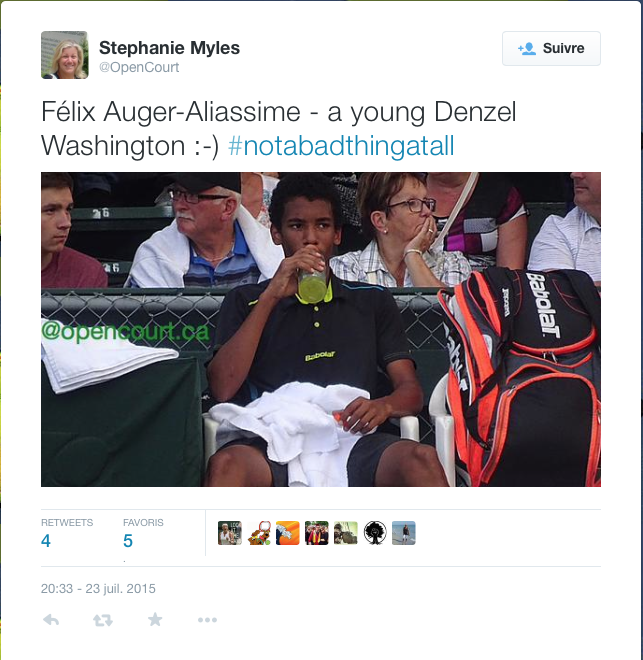 But if there’s a man that is following him closely, it’s his compatriot Milos Raonic.

The Canadian team of Davis Cup by BNP Paribas can really do some damage in a few years...

Hard-working holiday for Ana Ivanovic, who intends to return to the top level after a series of below-average performances in recent weeks. 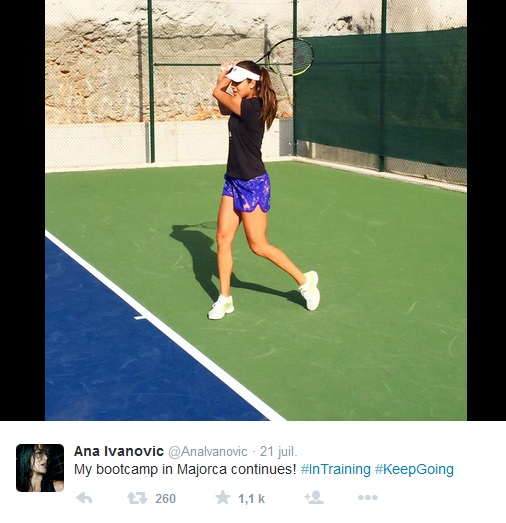 The Serb also took a strong decision: to separate from her coach Mats Merkel to work once again with Nigel Sears, that she had left just two years ago. Objective: To regain the world top 3.

It’s the sad info the week: Mardy Fish announced himself that he was going to end his career at the end of the summer.

His last tournament on the ATP tour should be the US Open, where he played some of his best tennis. The organizers have already paid tribute to him by publishing this collector picture on twitter. 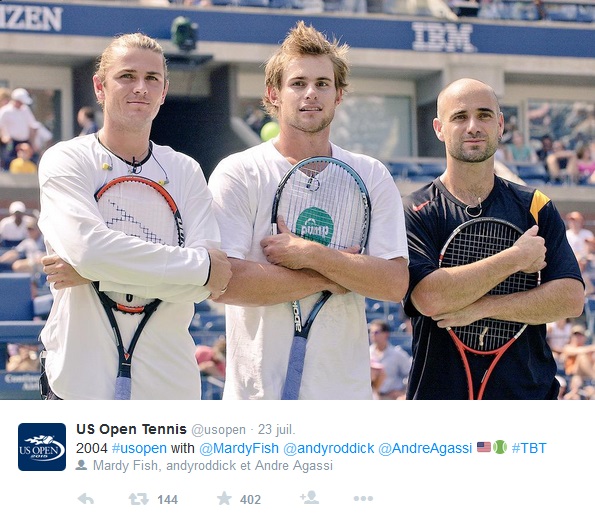 The comeback of the week is signed by Patty Schnyder, returning to competition... at 36. Not on the WTA circuit, but at the ITF tournament of Darmstadt where the Swiss was eliminated in the first round by Sofiya Kovalets (422) after a fiercely contested three hours match (7-5, 4-6, 7-5). 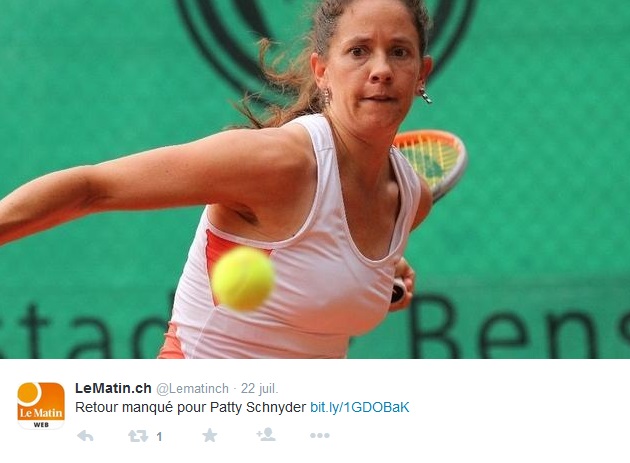 Schnyder, who had ended her career after the French Open in 2011 and has since experienced the joys of motherhood, was ranked 5th in the world exactly ten years ago.

The Australian hero of the Davis Cup by BNP Paribas quarterfinal against Kazakhstan took advantage of this "post-tournament" week to answer all the messages of congratulations and thanked all those who supported him. Including his turbulent and young compatriot Nick Kyrgios.

The future retiree also used social networks to celebrate 10 years of marriage with his wife Bec. 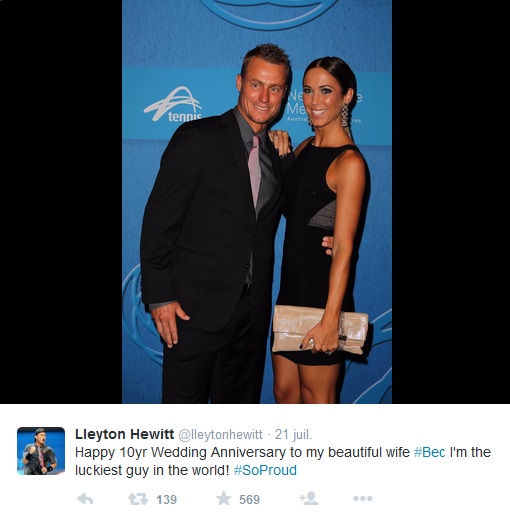 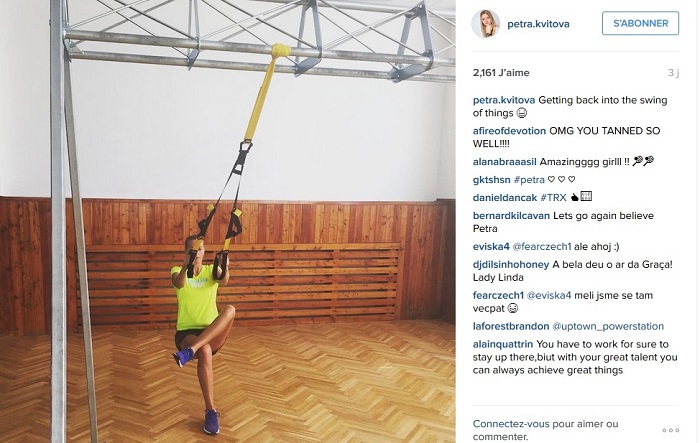 Really, really intensive. To the point of training with a kind of bulletproof vest to ballast her upper body. 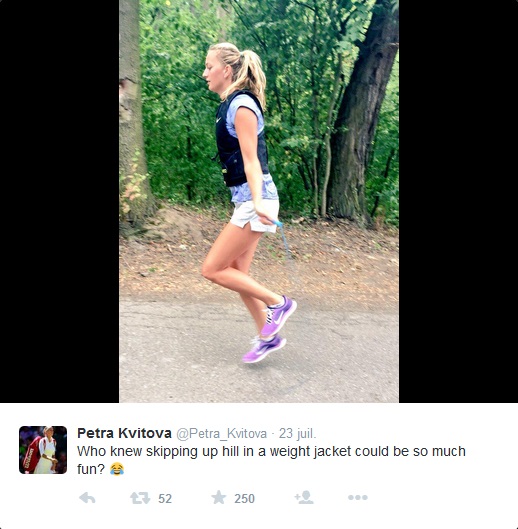 The two labours of Petra…

Training Session also for one of Kvitova rivals, the beautiful Caroline Wozniacki. 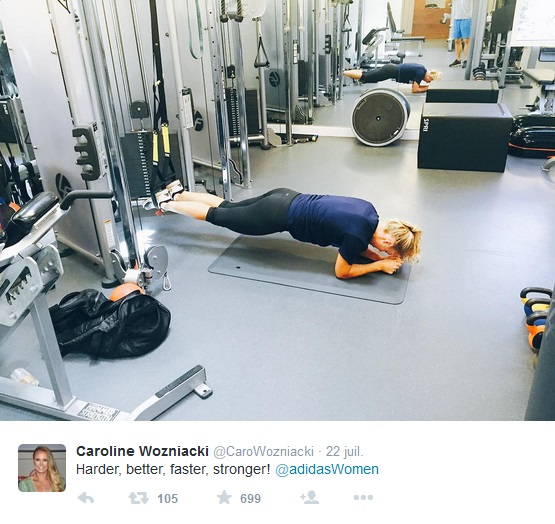 The Dane is getting motivated as she can when she’s working out, including with sweet rewards! 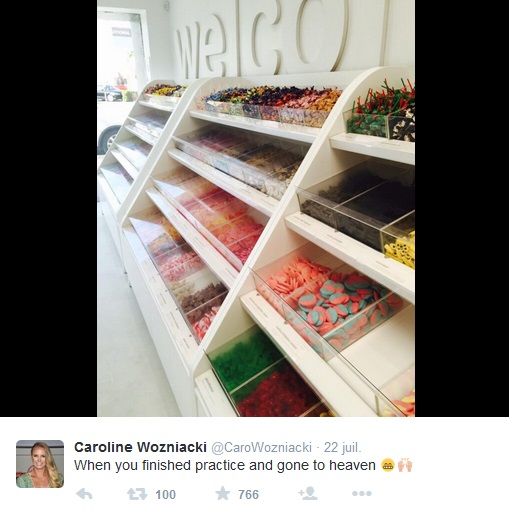 After the wedding, no honeymoon for Tomas Berdych but contractual obligations. The Czech took a few days away from the tour to play the leading role in the new ad of his equipment manufacturer. 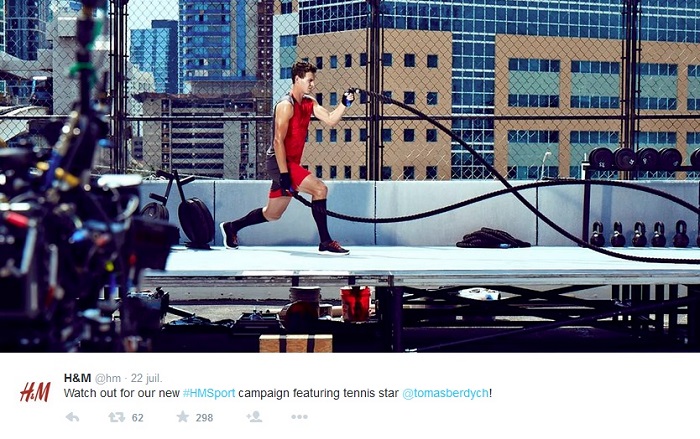 And here’s the final result:

The main protagonist of the British victory over France was very proud of his repeated exploits of last weekend, even if he was less demonstrative on twitter that on the court, after his decisive victory on Sunday against Gilles Simon.

And if he ended up exhausted, the Scot is still very happy and left very revealing subliminal messages on social networks.

He's ranked 546th in the world, he's Mexican and everyone would have preferred for this 30-year-old player not to be in this ranking since Daniel Garza became famous unwittingly this week for being called "fat" by Chilean fans at the Davis Cup by BNP Paribas match of the Group II. 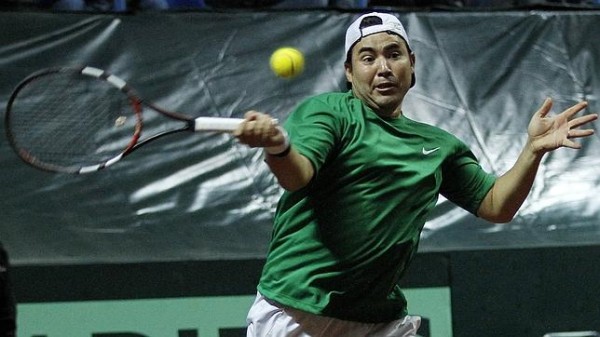 At the end of the day, this right handed player, looking a bit like a rugby player, didn't even had the opportunity to shut up them up by showing them the scoreboard because he (he was playing the doubles) and his lost 5-0...

8 days ago | by Steven Oliveira