While it’s already almost the end of the Australian Open’s first week, discover which player has, at the middle of the Monfils’ show and Berdych’s marriage proposal, taken the top spot in the funny We Are Tennis ranking?

He enters directly the first place in our ranking. The new darling of the Australian public, Nick Kyrgios, is at the centre of all attention after a wonderful week at home in Melbourne. But beware, Novak Djokovic and Andreas Seppi are following closely. Otherwise, a Briton had a classic British rant, a Czech player put a ring on a beautiful woman and Monfils did the show.

Nick Kyrgios almost experienced the first big disappointment of his career in the first round of the Grand Slam. Eagerly awaited at home after his surprise quarterfinal at Wimbledon last year, the young Australian was on the cover of all the local newspapers before the start of the Australian Open. 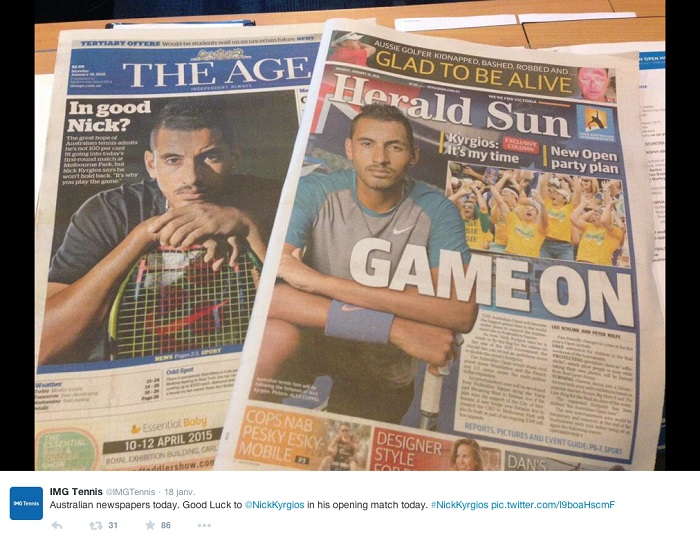 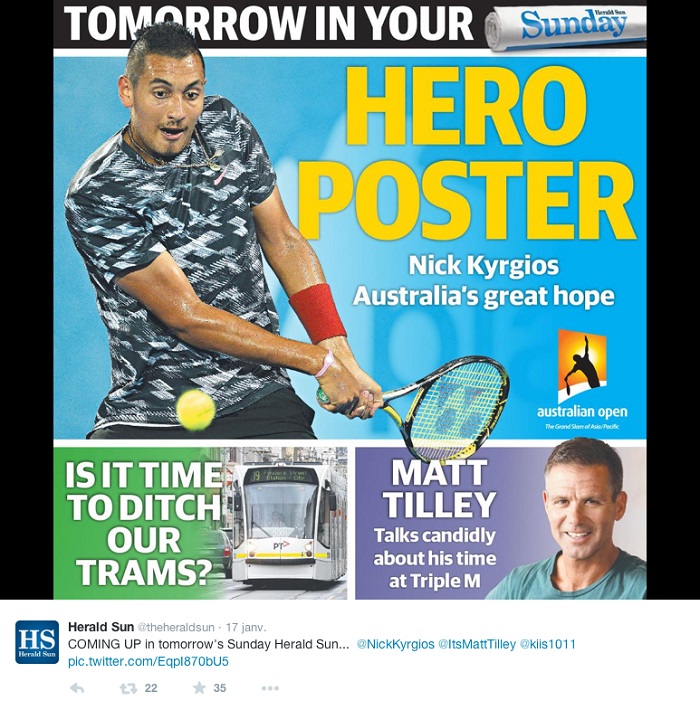 Problem: it took him five sets to defeat the Argentine Delbonis in the first round. But he quickly felt reassured the next round, against Karlovic. After the match, he, as always, dedicated his victory to his grandmother. 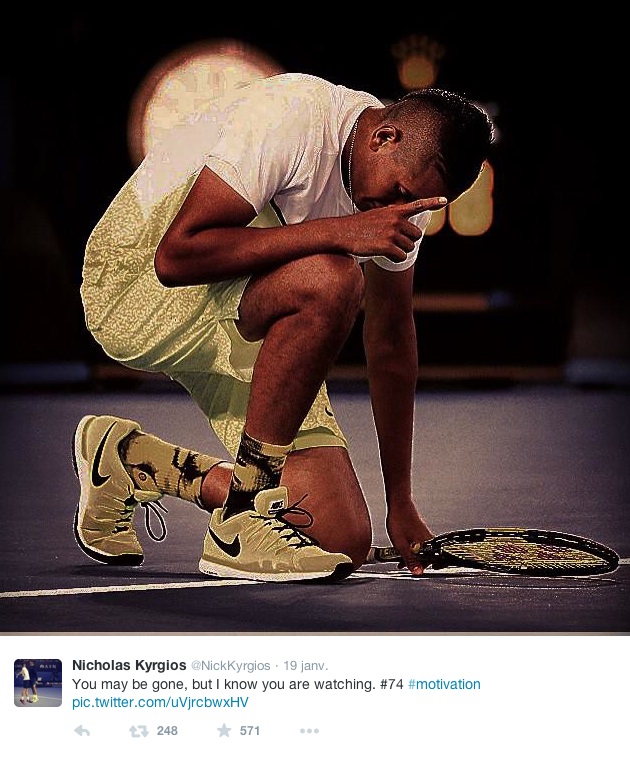 The favourite of the Australian Open, it's him. And after two rounds, the least we can say is that Novak Djokovic is ready. Benede and Kuznetsov can testify, the Serb only left them 14 little games between them. Beside that, Nole has, as always, found time to pose with his fans. Including some stars, like former footballer Clarence Seedorf. 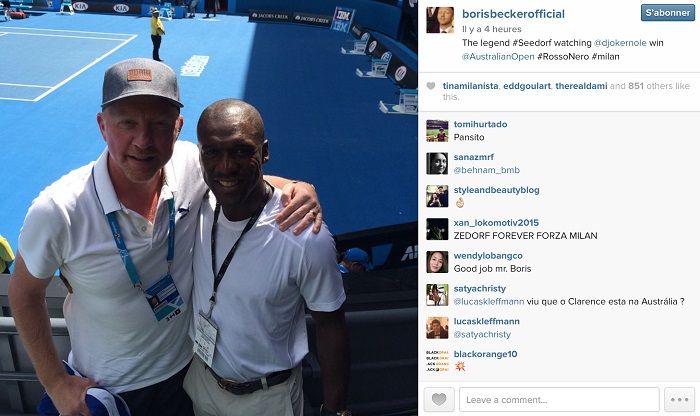 If Roger Federer gave himself a fright in the second round against the Italian Bolelli, it’s finally another Italian that sent him back to Switzerland: Andreas Seppi. A huge surprise, especially given their previous meetings. It’s simple, Roger was on 10 victories in 10 matches and not as single set conceded. But in Australia this time, he couldn’t do better than to pocket a little set, the third one (6-4, 7-6, 4-6, 7-6). It was the first time since 2001 that the world’s No.2 disappeared before the round sixteen. No wonder that Seppi felt the need to raise his arm in the air on the match point.

Of that match, Roger won't have to remember much, except maybe one thing: this hot shot!

Quiet week for Petra Kvitova. The Czech is in the 3rd round of the tournament without losing a set. To the point that when Petra Kvitova was even seen seeking the assistance of her fans to apply her makeup between two matches. 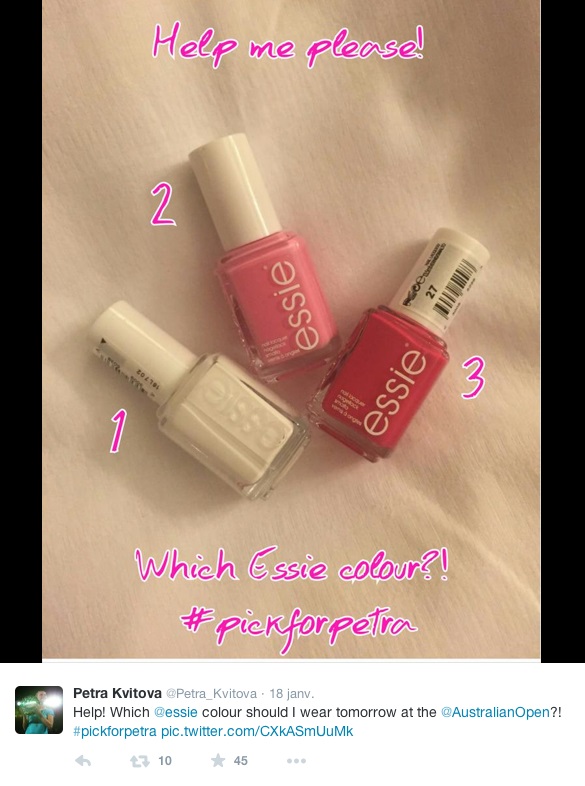 On other news, pure coincidence or a sign of destiny, before the first round, Petra met the winner of last year's Australian Open, the Chinese Li Na. 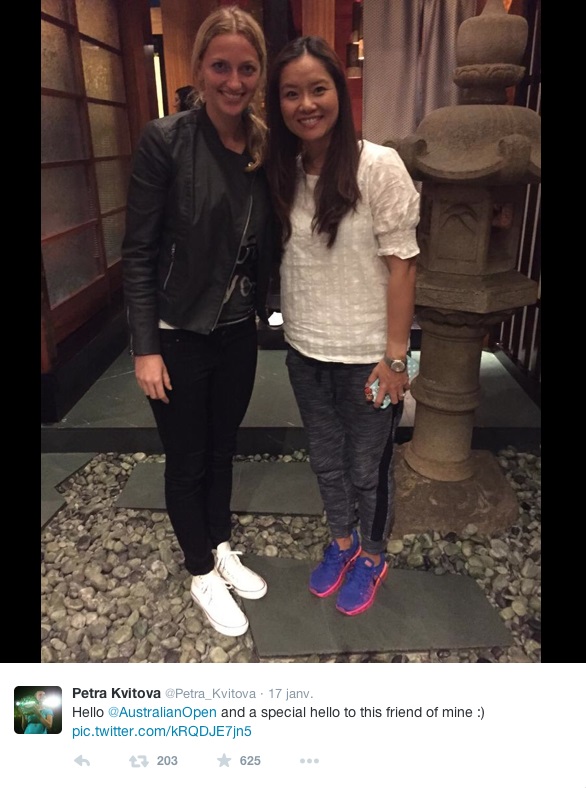 If he won his first three matches without losing a single set, Andy Murray has made more noise on Twitter than on the courts. On Wednesday, The Scot then made a small tackle after Rafael Nadal’s victory, despite his physical problems against Tim Smyczek.

‘When I cramped and won in the us open last year I was a "drama Queen, unfit, needs to see a shrink, faker" weird...” Last year, Murray was criticized during the final, some people thought that he was simulating a physical problem to get more time to recover.

Tomas Berdych will soon put a ring on it. Indeed, He announced at the Australian Open that he is going to marry supermodel Ester Satorova. 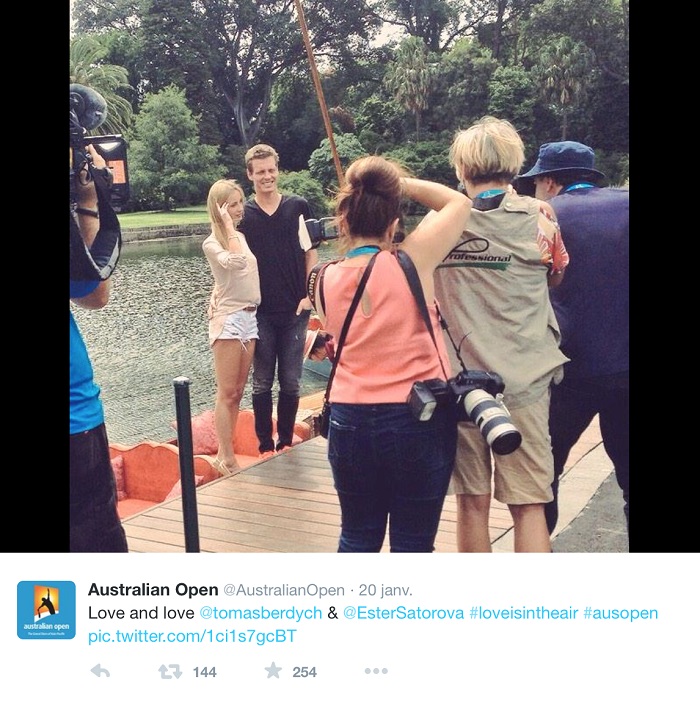 On other news, on the courts, the Czech has set quite a goal for himself his season: to finally win a Grand Slam: «to win a Grand Slam? It’s definitely one of my goals this season. But in order to do this I will have to work hard. It’s exactly what I’m trying to do, what my team is trying to do by helping me achieving such a performance. It’s my number one goal. »

It’s already over for Gael Monfils. The French has been eliminated by the Polish player Janowicz in five sets. Not really a surprise when you remember what he told Tennis Magazine before the start of the Grand Slam: « I haven’t played much, I trained physically but not that much. I still don’t feel very well. I fell and hurt myself when I arrived here, and I also have a few personal problems (…) it’s hard, I’m at the bottom. » But even when he’s down, the Monf’ remains a showman. He proved it once again in the first round against Lucas Pouille that he defeated after being led two sets to none.

He came close from the correctional. Rafael Nadal was almost out of the Australian Open from the second round. Ill, on the verge of throwing up at the end of the third set, the Spaniard tore himself away to win the last two rounds against the American Smyczek. An opponent who's been very fair play at the end of the match by giving him back a first ball when a spectator distracted Rafa on his service

Despite this, Nadal’s physical condition is worrying. Watchwords for the Majorcan: rest and recovery. 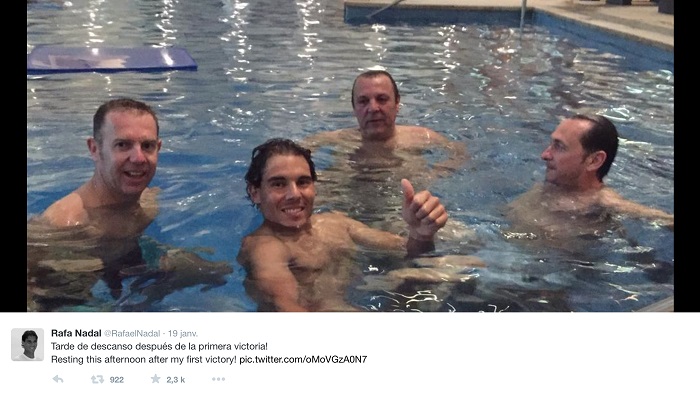 Ivo Karlovic was stopped in the second round of the Australian Open. Despite his 40 aces, the Croat giant was defeated by the local Kyrgios in four sets. He had tried everything, even a dummy smash.

Except that the day after his defeat, Dr Ivo seemed to feel a little depressed.

Jeremy Chardy enters this ranking unintendedly. Because on the courts, the French disappointed, eliminated from the second round by the Italian Seppi in four sets. He only has the doubles left to come to the fore. 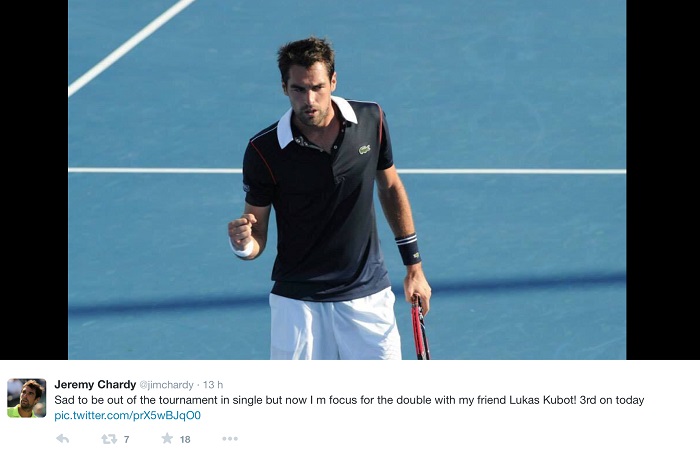 No, if Chardy is here, it’s because of a popular French puppet-show that made him a puppet for an easy pun. But we approve. 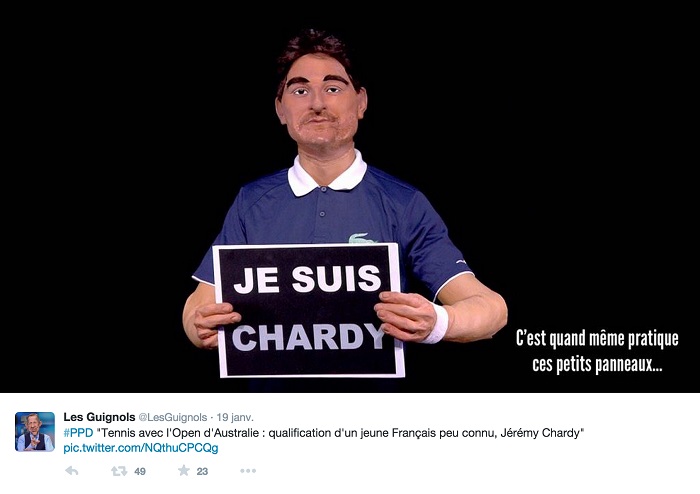 Qualified for the 3rd round, Alize celebrated two birthdays this week. First, her own, the French turned 25 on Thursday. For the occasion, she even had a lovely birthday cake. 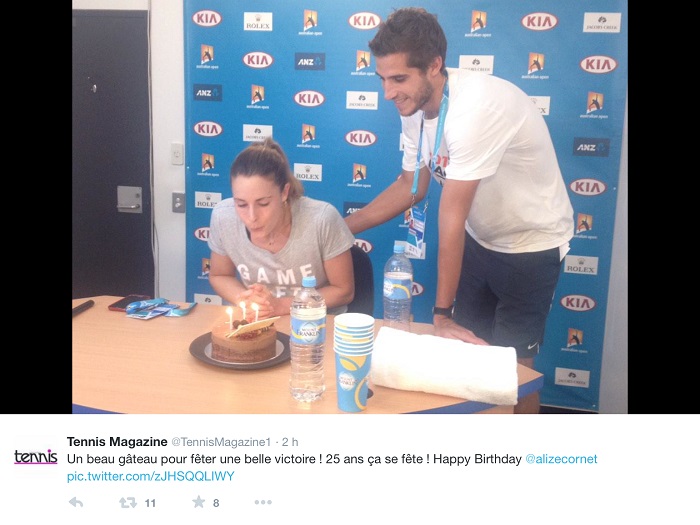 But this week is also the 10th anniversary of her presence in the main table of the Australian Open. Not bad at only 25. 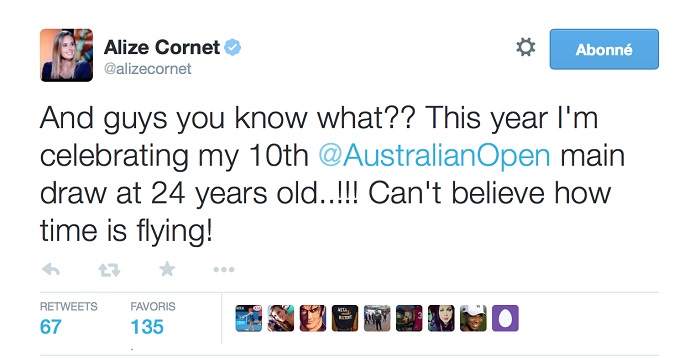 He managed the first feat of this 2015 Australian Open. The 18-year-old Australian Thanasi Kokkinakis, delighted his fans by defeating the seed number 11, the Latvian Ernest Gulbis. The 147th player in the world saved four match points before winning 8-6 in the fifth set after more than four hours on the court. It was worth a little celebration.

However, as often in those cases, Kokkinakis was defeated and eliminated from the following round by his fellow countryman Groth. And in five sets again. 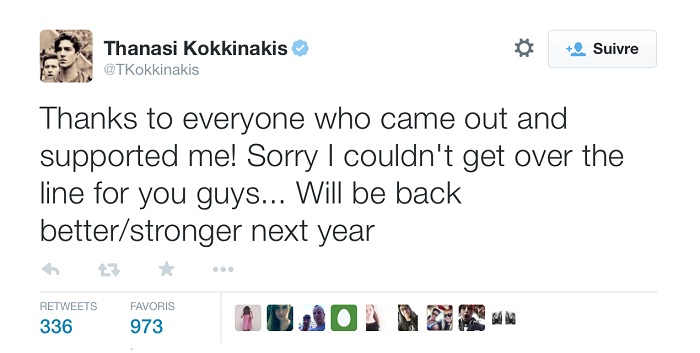 Heather Watson might have broken the last taboo in tennis. On Tuesday, after her defeat against Pironkova, the Briton confessed that she felt weakened by her… periods: «I think it’s just one of these things that I have, girl things.» The answer is simple, but is a brutally honest exception in women’s tennis where players never discuss this time of the month that can bother them during a tournament. Heather Watson dared, and we can only applaud.

The Corsican flag flew high over Melbourne, and the French island owes this to its son Laurent Lokoli. Less than a year after reaching the first round of the French Open, the 20-year-old qualified for the main table of the Australian Open for the first time in his young career. 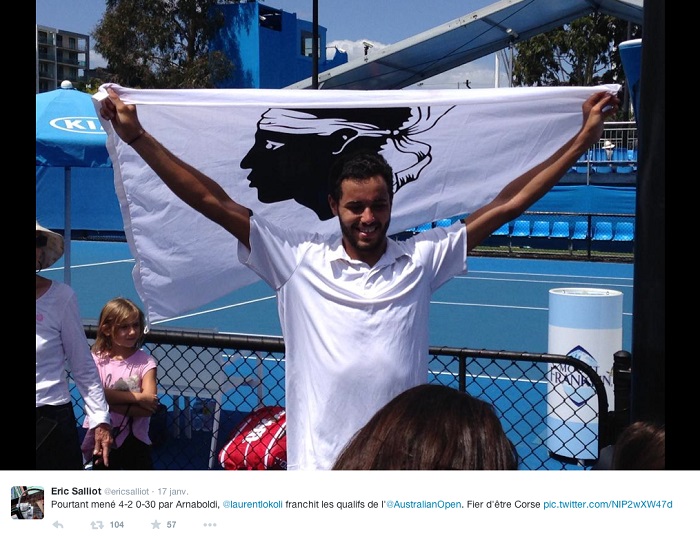 He even received the congratulations of the SC Bastia players, his favourite football club. 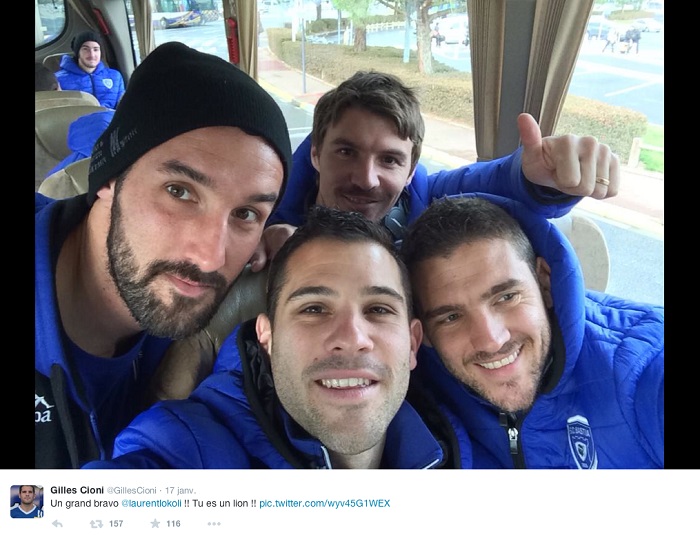 If at the end, he was defeated in four sets by Haider-Maurer, Lokoli has once again, flew high the colours of his homeland.

Bad week for Caroline Wozniacki. The Dane, seeded number 8, has been eliminated from the 2nd round by the former world number 1 Azarenka, who’s coming back after an injury. Beside this big disappointment, Wozniacki, a big Liverpool supporter, proved that she couldn’t get over the announced departure of Steven Gerrard: «I 'm obviously sad. I think Stevie has done so much for the team over the years. He's a legend. I think if that's what he thinks is the right time, I have to support that. I'll have to make a trip probably to LA to have a look again.”

8 days ago | by eli weinstein