You know that you're a fan of the Masters when...

The end of the year is near, it is sad indeed, but it is also a pleasure because it is means that it's time for the Masters. A competition that you truly love. And here are the reasons why.

The end of the year is near, it's sad because it means a tennis diet for a little more than a month. But it’s also a pleasure because it also means that it’s time for the Masters, the last individual competition of the ATP season. And this tournament, you love it. You really do. And here are the reasons why.

... Your favourite motto is "cut to the chase": the top 8 players of the moment gathered in a tournament without the early rounds that are usually useless, perfect.

... You love team sports competitions, with its group stage, which is so fun and conducive to calculations.

... Besides, you only watch football for the Champions League.

... You look at the track record and think that a tournament dominated by Federer (6 titles), before Lendl (5) and Sampras (5), has all your esteem.

... By the way, you hope that the great Roger will still be there next year to exceed the record of 13 participations currently co-held with Andre Agassi.

... You read the exact title of the tournament, "ATP World Tour Finals" and it makes your eyes sparkle and your heart throb.

... You love its little nickname even more: "The Masters tournament," no less. It sounds like the title of a blockbuster nominated for the Academy Awards.

... Speaking of cinema, you got a soft spot for The Expendables trilogy.

...When you miss Andre Agassi, you watch the video of his best moments in the 1990 Masters final against Edberg.

...You've been wondering what was the purpose of the Doubles' tramline in singles.

... You'd love to try them without tramlines, it would remind you of your debut on mini-tennis courts.

... A tournament won by Gustavo Kuerten (in 2000) cannot have haters. Impossible.

... And the lovely Michael Stich also won it (in 1993). No, really, reading the prize list of the Masters is a delight for the eyes.

... You also have fond memories of Nalbandian's victory in 2005 against a very strong Federer. The masterpiece of the Argentine's career.

... The tennis that you love, is played indoors on a hard surface. Cosy and Warm, protected from the weather.

... You love beautiful places. The O2 Arena in London today, the Madison Square Garden in New York for a long time...

... You're glad to see at the end of each season your heroes dressed up in suit and tie, as for a wedding, during the traditional presentation picture of the tournament.

... Although sometimes some of these pictures are really awkward, like in Shanghai in 2008... 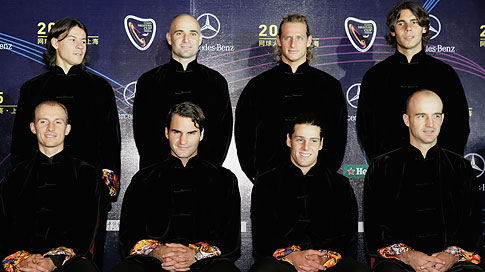 ... Blue courts, black outfits: you love thrillers at the end of the year

... You know exactly what is missing to Rafael Nadal to definitely become a legend of tennis: a victory in the Masters, of course. The last major tournament that still eludes him.

... Until then, it gives him something in common with Jim Courier and Andy Roddick.

... You get emotional at the mention of the exceptional final won by Pete Sampras against Boris Becker in Hanover in 1996. 5 sets, 3 tiebreaks, an unforgettable showdown.

... That same Becker who also managed a feat in 1988 by dominating Lendl in five sets, a man who was on 3 consecutive Masters titles and who was playing his 9th final in the tournament!

... A match marked by a stifling epilogue and an epic final rally.

... For fun, you look at the doubles prize list and oh! How surprising the Bryan brothers haven't won it since 2009.

... You love showing off to your mates with a trick question: what player won the Masters for its first edition? Easy, Stan Smith in 1970 in Tokyo!

...We had to wait for the last tournament of the season to get the Selfie the year. Thank you Tomas Berdych. 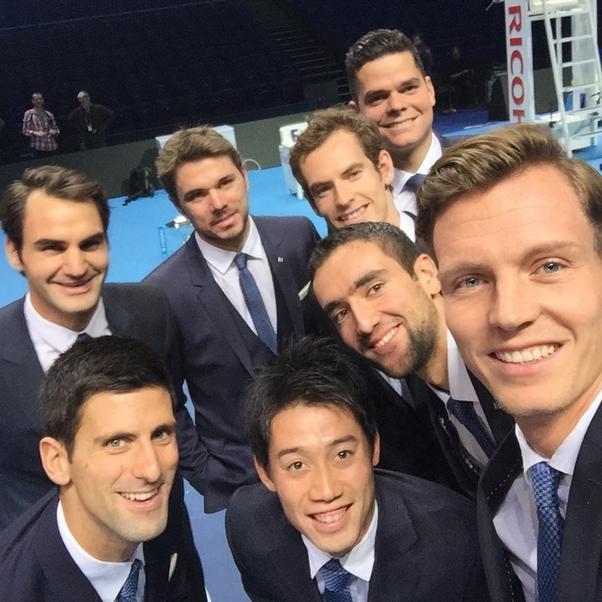 ... Speaking of pictures, you know that the Masters means holidays soon for tennis players. You then look forward to seeing their best pictures as tourists. Perfect for the lunch break at work.

...You haven't forgotten the lesson inflicted by Pete Sampras to his eternal rival Andre Agassi in the 1999 Master final.

... For the record, it was also the fifth and final victory of Sampras in the tournament and the third final Sampras vs. Agassi in 1999 (after Wimbledon and Los Angeles, that Sampras both won).

...You will never forget the epic journey of Grosjean in 2001, finalist against Hewitt.

... A lost final that turned into a victory a fortnight later in the Davis Cup by BNP Paribas, against the same Australians. Reveeeeeeenge!

By Régis Delanoë, with JF