This year at Wimbledon, there was obviously the white, the strawberries and the surprise eliminations of Rafa or Serena, but there also were many other little phrases and facts happening during the fortnight that went almost unnoticed.

The 2014 edition of Wimbledon might not be over yet, it has already been a very good year, full in beautiful matches, in suspense and surprises... and also in records, rants and punch lines. Review.

It is still too early to try and find an explanation to this phenomenon, but the fact is there: with 3151 aces already registered in the men's draw, this edition appears to be the second most prolific since IBM has been holding the records in 1992. And there are three matches left to try to beat the record set in 2010 (3259), year of statistical aberration represented by the Isner/Mahut and its 215 aces in a single match. More generally, in terms of game, Wimbledon has - at last - looked like a real grass tournament once again, where countless tight sets can toggle on a single point (see Kyrgios - Nadal, Wawrinka - Lopez...), where a single set lost at the beginning of the match by carelessness cost the round (Raonic - Nishikori, Djokovic - Cilic), and where the green surface is more favourable than anywhere else for the emergence of young shoots (with Dimitrov, Raonic and Kyrgios in quarter finals, and the first two at least in the semis, this is the first time that three players born in the 1990s shine together in the same Grand Slam). In short, this year, Wimbledon began to look like Wimbledon again. And it's nice.

Lleyton Hewitt, the 42nd round

More patched up than Rocky, Lleyton Hewitt yet still has the eye of the tiger. A big fan of Stallone and the saga dedicated to the Italian Stallion, the former world No. 1 might fall on often, he always gets back on his feet. Defeated in the second round by the flamboyant Jerzy Janowicz, the Australian took the opportunity to snatch a record in the Open era: the number of games played in five sets in a Grand Slam. Hewitt now stands at 42 (not to mention his 10 additional in Davis Cup by BNP Paribas). He leaves behind a few heavyweights in the history of tennis: Agassi (41), Lendl (39) and Sampras (38). Regarding the victories in these matches in five sets, only the Greek-American remains ahead: Sampras won 29, Hewitt 26.

"If someone had told me that I will win more Roland Garros than any other Grand Slam, I would have replied: ‘Are you drunk?’" Nay, not only Maria Sharapova has won Roland Garros twice, against a single title in each of the other three Grand Slam tournaments, but the inversion of her performance curve over the years between Roland Garros and Wimbledon is spectacular. As she progressed on clay, the Russian, who had opened her track record in London in 2004, has become more and more discreet on grass. Her recent defeat in the round of 16 against Angelique Kerber is the logical continuation of disappointments against Michelle Larcher de Brito (second round, 2013), Sabine Lisicki (round of 16, 2012) or a little earlier, Alla Kudryavtseva (second round, 2008) and Gisela Dulko (second round, 2009). At the same time, Maria Sharapova has won two titles, a final and a semi final in the last four years at Roland Garros. Maria, Queen of clay and allergic to grass... Prosit!

We already knew that American men tennis was in trouble. Now the girls are starting to stumble as well. While they have in their ranks two great champions, the Williams sisters, and a wide range of promising young players (Sloane Stephens, Madison Keys, Coco Vandeweghe, Christina McHale, Victoria Duval...), the girls have inexplicably missed out on their tournament collectively, to the point that none of them has passed the third round. And amongst the men, John Isner and Sam Querrey haven't been able to do better as the unbelievable happened: American tennis had no representative in the second week of Wimbledon this year, for the first time since... 1911, at a time when Americans were reluctant to take the Transatlantic to come and play in Europe!

Kyrgios, from Smith to Nadal

At 19, Nick Kyrgios has dramatically revealed himself to the world during this Wimbledon: quarter finalist of the tournament after saving nine match points against Richard Gasquet and beating Rafael Nadal in four sets and 37 aces, the Australian was close to never compete in the tournament. Beaten in the first round of the Nottingham Challenger by his compatriot John Patrick Smith, 198th ATP, Kyrgios was indeed thinking about "going back to Australia": "I ​​was in Europe for the clay court season, I had not win a lot of games... The results were quite average." Quite average... and further accentuated by the decision to part with his coach, Simon Rea upon his return home. Yet he decided to stay in Nottingham a week longer, and to play a second Challenger. After enrolling at the last minute, he had to go through the qualifications, where he played tremendously and ending up winning the tournament after defeating three players ranked higher than him... and as a result of this victory, received a wild card from Wimbledon organizers. His license to torment the world's best.

The time for revenge has come for Nick Kyrgios after his victory against the world No. 1 Rafael Nadal: "Just before the game, I’ve read an interview of my mother, who was saying that Nadal was too strong for me. That made me mad and spurred me on and ultimately it helped me to produce an extraordinary tennis." To further infuriate his mom... and, actually, to make her proud. But especially to infuriate her: "The first thing I did after the game, was to text her. I didn't write anything. Just a smiley. It was enough!"

Who said that the concept of specialist had disappeared of women's tennis? Sabine Lisicki is the personification of the grass specialist... and, mostly of Wimbledon. With a final, a semi final and three quarter finals in her last five appearances in the tournament, the German is the most brilliant player not to have won Wimbledon in recent years. Not bad for a girl who is still waiting to play her first quarterfinal in a one of the other three Grand Slams... "I cannot explain why I like this tournament so much. It's great to play here. People know my story. My first good result in a Grand Slam, it's here. This is where I made my comeback after my injury (hip, in 2010, when she fell beyond the 200th place in the world, ed.) And then there was my final last year. There is already a long history between this tournament and me!" As long as the list of her victims at the prestigious All England Club: Serena Williams, Maria Sharapova, Li Na, Agnieszka Radwanska, Marion Bartoli, Svetlana Kuznetsova, Caroline Wozniacki, Ana Ivanovic, Samantha Stosur...

Fognini, his (bad) temper is priceless

Ranked 15th in the world, there is another ranking in which Fabio Fognini is well in the lead: the one of the financial penalties for various outrages to the code of tennis behaviour. In the first round of Wimbledon, against the American Alex Kuznetsov (that he won), the Italian made a new record in a match after collecting 29,500 $ in fines: 2,500 $ for "visual obscenities" (not "verbal" meaning that it is more related to a finger than to insults) 2500 $ for "verbal abuse," 5,000 $ for "lack of sportsmanship" and 20,000 $ for having smashed his racquet on the holy London grass, which is so expensive in terms of maintenance. In other words, a busy day in the life of Fabio Fognini, who preferred to shrug: "I will always stay the same. It's my bad boy side that comes out... What can I do… I'm different. I'm sorry if you don't like it!"

"You must be even stronger than the hawk-eye since you can see in the dark!" A sour Tomas Berdych, after the umpire of his third round against Marin Cilic decided to push to finish the game, no matter what... even after dark. The top 10 player who is a regular of tough schedules whatever it is early in the morning or late at night (tied with David Ferrer), the Czech was unable to extricate himself from both frustration and a great Marin Cilic. But more than the victory of the Croatian player (7/6 6/4 7/6), what we will remember is the time shown on the clock after the match: 9:38 p.m. Or the latest ever seen at Wimbledon, excluding special cases on Centre Court... with its roof and artificial lighting.

Wimbledon has a special relationship with tradition: propped up on certain details (white, strawberries, "middle Sunday" without tennis...), it also doesn't hesitate to initiate revolutions close from the capital crime if it goes in the sense of its interests (slowed down surfaces, roof on the centre court...). Another custom is going to end from this weekend, during the ladies and men finals: the freshly crowned champion used to climb in the stands, in a hurry to embrace his family in the stands. Initiated in 1987 by Pat Cash, followed by Goran Ivanisevic (2001), Rafael Nadal (2008), or no later than last year, by the winners Marion Bartoli and Andy Murray, this demonstration of exuberance will become obsolete this weekend, a "door of Champions" has indeed been built within the Centre court, to allow them direct access to their box. "As if a Wimbledon champion was not agile enough to climb the stands, said Pat Cash ironically. When you win Wimbledon, you need to exteriorize all this energy. The climbing is part of this moment of communion with your friends and loved ones." Will the winners of this weekend have the lucidity to go through the door by themselves, or will a member of the Protocol have to tell them? 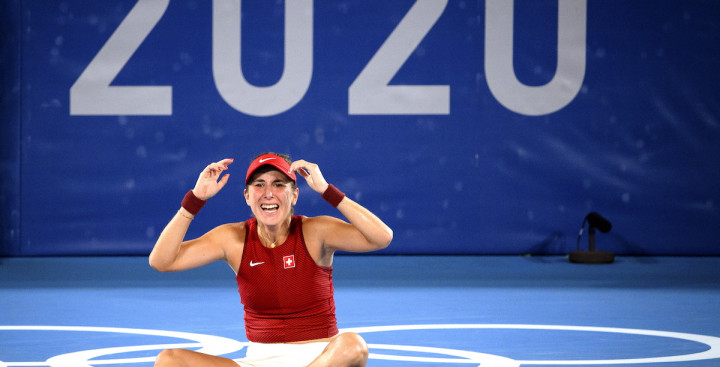