A service clocked at more than 150mph, a charming ambassador in Sochi and two champions discussing retirement... Relive the best moments of the tennis week by reading the Journal of We Are Tennis.

Back to the competition in Rio, the Spanish visited the Corcovado. Meanwhile, Roger Federer is making ​​commercials, Andy Murray got a beating in Rotterdam and Novak Djokovic went canoeing with his dogs.

Novak Djokovic continues his physical preparation in Monaco, where he lives, working out his upper body through sea trips in canoe. But taking it easy, with his dogs. That said, the real information of the Djoker's Week is a statement he made, which was pretty surprising: "With tennis it was love at first sight, since I was 4 years old. I always enjoyed a lot of support from my family, my club and the government, but in 2010 my relationship with this sport was of both hate and love. I was losing a lot when facing Roger Federer and Rafael Nadal and I seriously thought about retiring. Then I told myself that I had to survive these feelings and I had to win Wimbledon, which has always been the main goal of my whole life"». Phew. Imagine what a loss it would have been. Meanwhile, Rafael Nadal has not yet been back on the courts since the Australian Open. He’s expected to return to the competition for the Rio tournament which starts this week. After arriving in Brazil, he climbed to Corcovado to see the Christ statue.

Meanwhile, Andy Murray is on the courts. In Rotterdam, the Scots was knocked out in the quarterfinals by Marin Cilic (6-3, 6-4). Finally, Roger Federer also work on his fitness before the clay season, while remembering good memories. On the 13th of February 2000, the Swiss was playing his first ATP final in Marseille. At 18, Federer was defeated by Marc Rosset in three sets.

Thanks to his victory in Rotterdam, the Czech Tomas Berdych passed Andy Murray in the ATP rankings and is now sixth. A ranking still dominated by Rafael Nadal before Novak Djokovic, Stanislas Wawrinka and Juan Martin Del Potro. Roger Federer is eighth before the 1000 Masters. Which means that, for the moment, he would qualify for the end of season Masters while everyone thought he was over. You can’t bury Roger that easily.

In Memphis for the local ATP tournament, the Spanish Feliciano Lopez was keen to have a little NBA fun. Thus, the player took a "Selfie" before the game between the local team the Grizzlies against the Washington Wizards. At the end of the match, Lopez traded his racquet for Marc Gasol’s jersey, the Grizzlies pivot. Give and take. 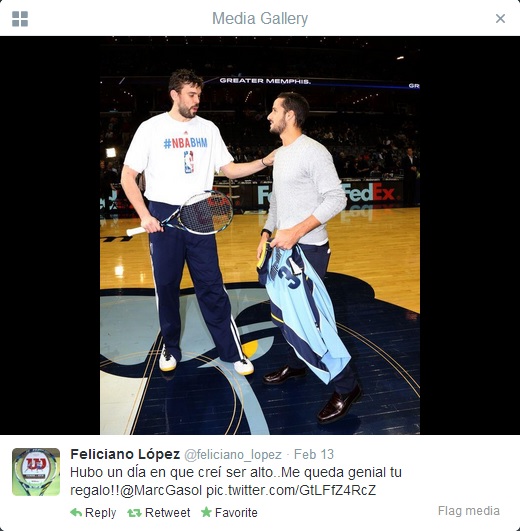 Albano Olivetti might not be the most famous player of the tour but he clearly has an amazing arm. Thus, in Quimper, the player hit a service at 151mph. Routine for the one that was flashed at 144 mph in Montpellier, recently. In Quimper, Olivetti has also served two other first balls at 150mph and 148mph. Without forcing.

Top 5: They made the week

Caroline Wozniacki: The Danish player lost from the second round of the Doha tournament. But it didn't really matter as she took the opportunity to go sightseeing in Qatar. Thus, the former world number one cares about ecology. So, she went to visit penguins. Yes, penguins.

Tomas Berdych: With an easy victory against Marin Cilic in Rotterdam (6-4, 6-2), the Czech won the 9th title of his career. A trophy that allows him to get the 6th place in the ATP rankings.

Simona Halep: The Romanian player came back from Doha after beating Agnieszka Radwanska. The fourth player in the world lost in the semi-finals in two sets (7-5, 6-2). Halep, on cloud nine, continued her victorious journey in final against the German Angelique Kerber (6-2, 6-3). It’s Halep’s first title this year.

David Ferrer: The Spanish player keeps playing well in the shadow of the greats with a new title on clay. It was in Buenos Aires and his victim was called Fognini: 6-4, 6-3.

Kei Nishikori: The Japanese won the Memphis tournament, where he was defending champion. Against Ivo Karlovic, he didn’t beat about the bush.

- «Thanks for the lesson Andy but one day I’ll beat you!! ». Edouard Roger-Vasselin isn’t a sore loser. For his third defeat in as many games against the Scots, the French player remains fair play.

- « If there are rumours that I'm going to retire when I'm 40th world, I can’t even imagine what it will be if I lose other games and find myself 80th in the rankings. I lack confidence and rhythm, it’s true, but I'm not going to get even more confused with the idea of ​​retiring. I admit that it crossed my mind, it would lying to say otherwise. But I'll say it loud and clear, my goal are the Olympics in Brazil. Retirement is not for now. ". Juan Monaco has decided to kill the rumours of retirement. It must be said that the player remains on six consecutive losses. At 29 years old, Monaco chose to be honest.

The indiscretion of the week

We know it, Russian female Tennis players are very close from the male Ice Hockey team. After Maria Kirilenko started to date Alexander Ovechki, the Russian hockey players can count on a new great supporter, Maria Sharapova. At the Sochi Olympics for NBC, the blonde decided to wear the colours of the national team with pride. 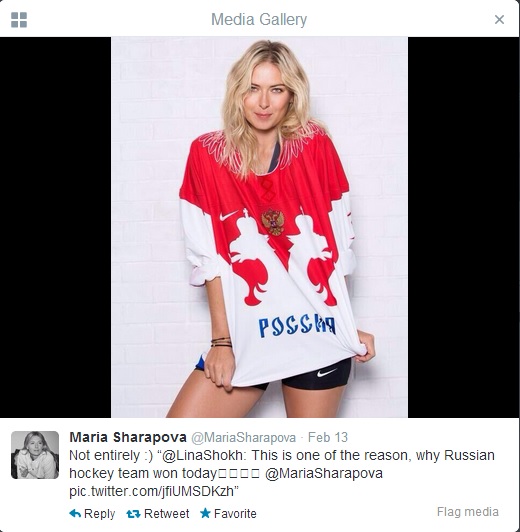 The angry man of the week

Dmitry Tursunov is the angry type. After receiving a soft warning for taking too much time between points during his first-round match against Grigor Dimitrov at the ABN AMRO World Tennis Tournament on Tuesday, the Russian got angry and told the chair umpire: "Rafa will pick his ass for 30 seconds and you guys will watch it. You’re not going to say a word". Boom.

The point of the week

Kerber vs. Jankovic, in Doha. A powerful exchange for a XXL point. But it was too fast for the Serb.

When Sharapova doesn't bear the Olympic flame, she plays tennis, a bit, and she also does a lot of advertising. Recently, the Russian had the opportunity to show off in a German beauty, the Panamera GTS, estimated at 100 000 GPD. Just that. A model designed only for her. She’s the brand ambassador after all. And she speaks very well of it:

« Creating and specifying a very personal Porsche Panamera was such an exciting undertaking, I count myself not only as an athlete, but also as a designer – I’ve designed full collections of luxury accessories, apparel, and even candy for years. I never thought I would have the opportunity to add a car – especially a Porsche – to that repertoire. It’s an ingenious melding of the design world with automotive personalization»

Ok, she’s paid to say it, but it’s still beautiful. 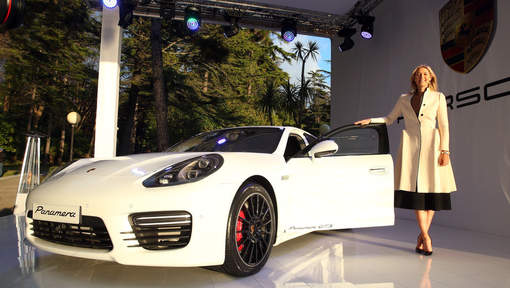 Ana Ivanovic probably has the most beautiful legs of the tour. In Doha, the Serb decided to show them to the tennis world. It was a success. She made the Radwanska sisters and their cover of the Polish Gala look almost boring.

22 days ago | by Craig Gabriel